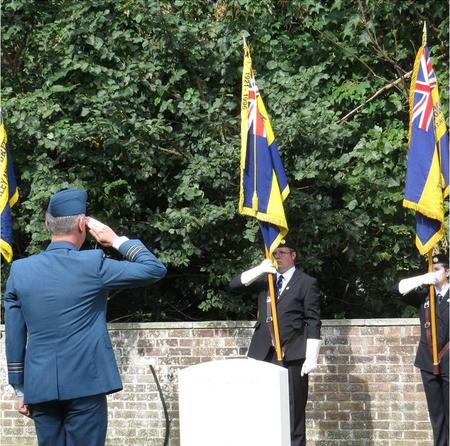 ​LCol Williamson is the Canadian member of the Directing Staff at the Joint Services Command and Staff College, Shrivenham UK.  Apparently the resident Canadian exchange officer receives an invitation to attend a special service that takes place each September at Thorney Island.  Shawn reports that “the service was very nice and quite unique in that not just Allied Airmen (there are commonwealth war graves of RAF, RCAF, RNZAF, and RAAF aircrew) are remembered but also those of the Luftwaffe.  Representatives of all these countries were at the ceremony”.   In September 2017, Shawn and the Australian member of the Directing Staff, as well as Maj Shawn Guilbeault and a German Air Force student, made the two hour trek to Thorney Island.  Apparently there is a very nice plaque within the church that identifies 415 as having operated from the RAF Station Thorney Island.

With the assistance of LCol Williamson, the Association was able to contact the current Parade Marshall, Mr Andrew Hill.  He shared the following information concerning the annual ceremony.  Apparently the service began just after the war.  It was originally organised by veterans of the Luftwaffe, to remember the German aircrews who were buried at Thorney Island.  The annual service continued in that format until approx 15 years ago, when the last of the 'comrades' became, either too old or passed away.  At that time the Sussex county Royal British Legion (RBL) was asked to take on the organisational role.  The RBL renamed the service to the Anglo-German Service and decided to hold the event in mid-September effectively tying it to the Battle of Britain (most of the German aircrew had been shot down during the Battle).  Instead of remembering only the Germans who were lost, it was decided to remember all aircrew buried at the cemetery. ​ 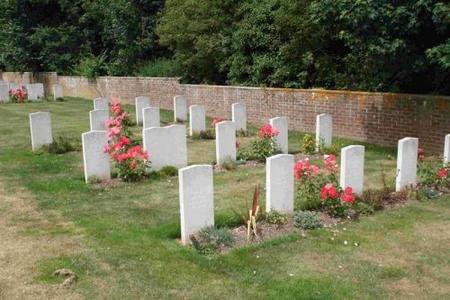 ​Over the years attendance at this service had dwindled and only a handful of RBL Standards, the RAF Association Standard and the Canadian Veterans Association (CVA) of the UK Standard were seen on parade.  An effort was made to garner new interest in this service.  On the Canadian side, it would seem that the CVA lobbied the Canadian High Commission in London, to send an RCAF representative.  This led to the attendance of LCol Stephen Allen, who in turn informed the Canadian and German Officers at the Joint Services College.  The attendance at the service has now grown to almost 100 regular attendees, including representatives from the Canadian High Commission, German Embassy and Australian Defence force, alongside the Commanding Officer, Thorney Island, and members of the RBL and RAFA. While not explicitly excluded, the current Parade Marshal has stated that he is not aware of individual squadrons being represented at this remembrance event.  He did note that there is one direct connection with a squadron.  The only surviving veteran of one of the lost German crews continues to attend the service.

In summary there is an annual service on Thorney Island.  It normally takes place on a mid-September Saturday.  The service is held at St Nicholas Church, which is located within the confines of RAF Station Thorney Island.  From 1000 to 1030 hymns and readings take place within the church, which has seating for 80. Immediately following the service, a Remembrance Parade is held amongst the war graves.  All are welcome to attend.  Service Dress with medals or equivalent civilian attire is recommended. There is no wet weather provision arranged.  Coffee and Tea are served.

St. Nicholas Church is located in West Thorney, Thorney Island, West Sussex.  It is part of the Diocese of Chichester.  The Church dates mostly from the late 12th century, with Norman windows in the chancel, and a tie-beam and kingpost roof.  Why it was built in such an isolated position is a mystery.  Thorney Island was a Royal Air Force airfield from 1938-1976.  Today it is an Army base.  The Church is located within the Base and access must be requested in advance.  The Commonwealth graves and German graves from World War 2 are located on the church grounds.

It is hoped that someday soon a current or past member of 415 Squadron will have the opportunity to attend this unique memorial event.   The Association would gladly welcome any notice that a member of the Alumni or Squadron plans to participate.​

For many years the Association has wondered whether or not a remembrance ceremony of any type was or is held near or at the former RAF Station Thorney Island.  There are no records amongst the Squadron artefacts, which would indicate that an annual ceremony occurs.  Indeed to date, no member of the Alumni has come forward with any related information concerning this query.  Recently the Association was pleased to learn that a member of the RCAF, LCol Shawn Williamson, had contacted the Commanding Officer 415 Squadron to advise him that he had attended a remembrance ceremony at Thorney Island.  Shawn reported that whilst there he had seen a number of Swordfish graves at the Saint Nicholas Parish Cemetery.   The Association contacted Shawn to learn more about the ceremony. 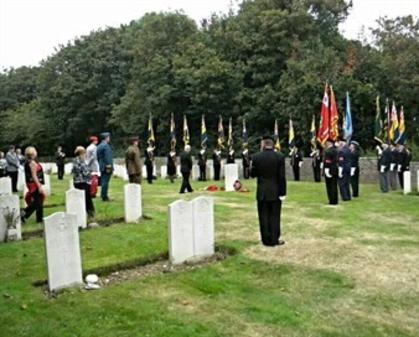 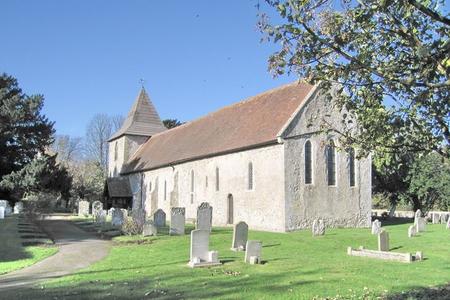