Members of 415 (Long Range Patrol Force Development) Squadron gather at the unveiling of the Squadron’s ‘Inspiration Stone’ on 28 September 2017.  Four members of the 415 Squadron Association, Al Harvey, Serge Parisien, Jim Lambie and Chris Henneberry, joined the Squadron for the celebration.  The stone had been on display at the Greenwood Military Aviation Museum from 2005 to 2017.

Many roles, many missions, changing names and history – but the focus at the current incarnation of 415 (Long Range Patrol Force Development) Squadron seems to be on the future.  As a physical reminder of the foundations of the Squadron, each time personnel report for duty they will pass a cairn that had been on display at the Greenwood Military Aviation Museum since 2005.  Reclaimed by 415 on the 28th of September, the cairn now sets at the front entrance of the Squadron. “This stone was never meant to be in some memorial garden,” said former Commanding Offi cer Colonel (retired) Chris Henneberry.  “The sacrifice and devotion to freedom that formed this unit is an inspiration to ‘those who follow.’ That’s meant for you.”  Henneberry detailed the stone’s significance: granite for strength and endurance, red stone, representing sacrifice and the colour of 415; and its three sides, locating the squadron in Britain, Summerside and Greenwood.  In 1997 it marked the 40th anniversary of 415 Squadron; it now captures 60-plus years of service. 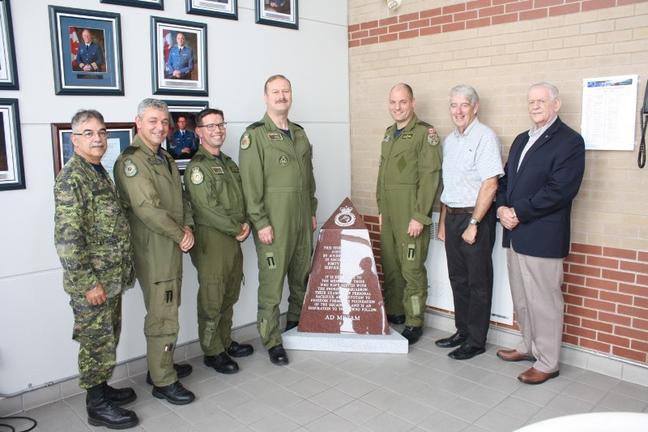 “If people take a close look at this stone, it gives a complete and precise history of who the Swordfish are.” 415 Squadron Commanding Offi cer Lieutenant-Colonel Bernie Thorne said the stone represents a link between the past and the present: “it’s ours, and I’m quite pleased to have it back here.  We’re not the same as the former 415 crews who walked past ‘Inspiration Stone’ every day from years ago.  Our mission has evolved and today the aircraft is very different.  What we share is an identity as members of 415 Squadron: we are the folks who build, fix and fl y the aircraft that operates over the waves. We’re going to do the best that can be done.” Prior to the unveiling ceremony, Squadron members fi lled their day with a range of professional development, including a 415 history quiz that was sprung on them by Henneberry and Colonel (retired) Jim Lambie.  “I’m a competitive guy, and I think it’s important to feel your squadron is the best,” Henneberry said.  Having a good understanding of the Squadron’s history is an important ingredient in growing the best.  From the squadron’s Second World War formation date, to the number of battle honours, to the heritage behind a memorial stained glass window at 14 Wing’s St. Mark’s chapel, Henneberry said “it’s interesting to know about the people: what they did, and the sacrifices they made”. 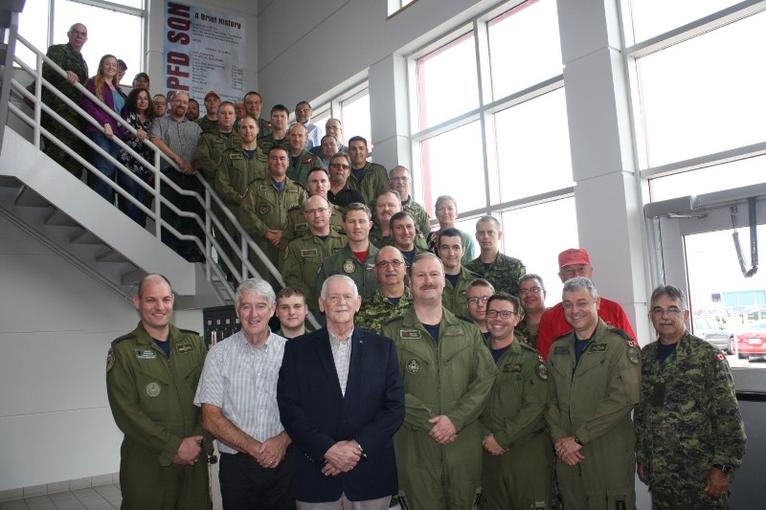 MORE THAN MEMORIES – Swordfish will walk past ‘Inspiration Stone’ every day
Sara Keddy, Managing editor of the “Aurora”
Published 09 October 2017