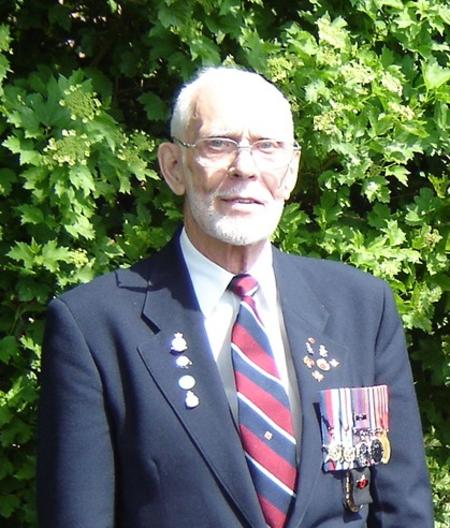 WWII Veteran Douglas Sample recalls a tragic accident that occurred by chance on 21 August 1944, which had a huge impact on 415 Squadron. ​

​Hear this unique story in Doug's own words Click Here

Since my time as Commanding Officer of 415 Squadron, Doug Sample and I had been good friends. We corresponded with each other on a regular basis and tried to meet annually at the East Moor Memorial held at Sutton-on-the-Forest in Yorkshire. From its inception in the early 90s, he was a key organizer of the Memorial. Likewise he was devoted to Yorkshire Air Museum and in particular the preservation of the history of Six Bomber Group. He had an ability to catch the attention of those around him. I remember vividly Doug's attendance at a 415 Squadron Mess Dinner in 1999, where he showcased the Squadron history at East Moor. This short and slightly built gentleman was a human dynamo as he reached out to the youth of the Squadron sharing stories and imbuing an infectious curiosity about those who served and were currently serving as Swordfish. I witnessed the same passion and energy whenever I travelled with Doug or saw him in action at a Memorial or at a Museum.

He served overseas in No. 6 Group (R.C.A.F.), Bomber Command with 415 Swordfish Squadron at East Moor, Yorkshire. Completed a tour of 33 operational sorties during which time he was commissioned as a Pilot Officer and promoted to Flying Officer. He was the founding President and Chairman of the Canada Branch of the Yorkshire Air Museum And Allied Air Forces Memorial. On November 6, 2006, he was awarded the Minister of Veterans Affairs Commendation for his tireless effort to preserve the memory of all the young flyers and air crew who sacrificed their lives during World War ll.

Douglas Lloyd Sample was born on 8 March 1926. He passed with courage and dignity from St. Mary's Hospital on November 6, 2009. Sorely missed by his family, he was one of the last Swordfish from the Second World War era. A fountain of knowledge and an inspiration to many of his dear friends and associates from around the world.

Sadly missed and forever remembered by everyone whose lives Doug touched. Unfortunately I was unable to attend a memorial service held in his honour on Saturday 28 November 2009, at St Mark's Anglican Church, St.Laurent, QC. I will however make mention of his passing and his many contributions at this year's East Moor Memorial, which will be held on Saturday 22 May at the Sutton-on-the-Forest village "Pound".