Mike believed that it was extremely important for the Village of Sutton-on-the-Forest to remember those who served at RAF East Moor and in particular the many who made the ultimate sacrifice.  Whether sun or rain, each event was always poignant, precise and punctual.  One could always find Mike in the background working tirelessly to ensure all aspects of the service were in place. Over these many years he never sought personal aggrandizement for his actions.  On the contrary, he was always relieved when each ceremony was over.   But even then, he would offer to assist any visitor to ensure their visit to Yorkshire, and in particular Sutton-on-the-Forest, was a memorable occasion.

Mike Rigby was a good man with a big heart.  His presence at future memorial services will be missed, however, he will always be fondly remembered by the many RCAF veterans he met, of which I am but one.

May Mike rest in peace. 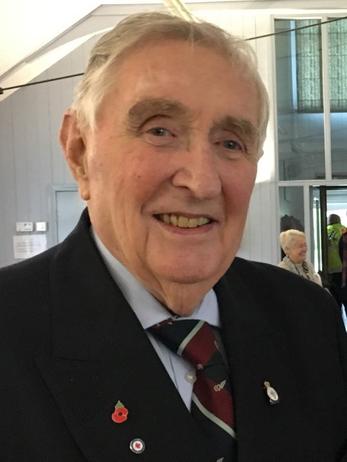 Mike Rigby was a familiar face to the many Swordfish who have had occasion to attend an East Moor Memorial Service.  He was an RAF veteran, who in retirement, served for many years on the Sutton-on-the-Forest Parish Council.  For over ten years Mike also acted as the Parade Marshall for the memorial service.  Always the perfect organizer and host, each May, he warmly greeted visiting aircrew on behalf of the Village of Sutton-on-the-Forest.  I first met him in 1998, while travelling with 415 Veteran Doug Sample.

Originally the East Moor Family consisted of the veterans of 415, 429 and 432 Squadrons, as well as the residents of the Village of Sutton-on-the-Forest.  Over the years the dwindling number of participating World War II veterans had resulted in the Family Reunion becoming a Memorial Service.

In 1990 the East Moor Sundial Cairn was placed in the Sutton-on-the-Forest village pound.  Prior to 2007, the annual service was more or less a joint venture between one or two Canadian veterans and the Parish Council.  For at least ten years Mike worked diligently with Doug Sample and others to ensure that a well orchestrated annual service was conducted.  In 2008 as the Parish Council Chairperson, Mike agreed that the Village would take the lead role for all future services – as it happened this was also the last year that a Canadian World War II veteran attended the service.   The fact that there has been an annual service each year since 1990 is in no small part due to the efforts of Mike Rigby.