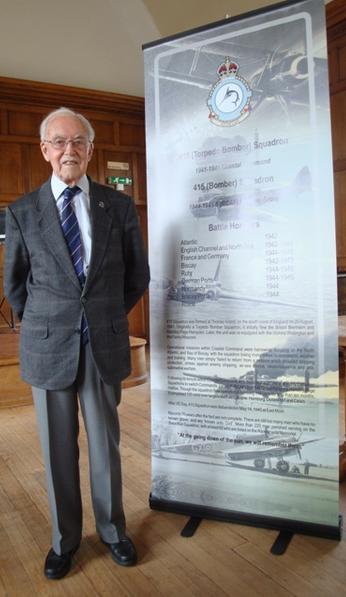 In January 2010 my wife received a call from the UK.  On the other end of the line was a doctor who said that he wanted to talk to me concerning one of his patients.  Apparently the subject of WWII service was a regular part of the discussions between the doctor and the patient.  His patient had apparently been a founding member of 415 Squadron.  Using the internet the doctor found the 415 Squadron Association website and ultimately found a contact number.  Shortly there after, I gave the doctor a call.

As I already had plans to attend the 2011 East Moor Memorial Service, I offered to meet with the doctor’s patient, Mr. Norman Scott, at his residence in Hull UK.  Mr. Scott lives in a retirement complex with his wife Elsie – they will celebrate their 70th Anniversary on 4 June.  So it was arranged and on 20 May I travelled to Hull and spent an enjoyable morning with Norman, his wife and a number of his friends who reside at the same retirement complex.  It was a beautiful day in Yorkshire and Norman was in fine form and ready to share his knowledge concerning the foundation of the 415 Squadron.

Norman was an aviation technician by trade, and was serving with 42 Squadron at an airfield near Gatwick since before the Battle of Britain.  One day in late June 1941, shortly after he was married, he was directed to report to the Squadron Orderly Room.  He was told that he was promoted to Sergeant and that he was to proceed to Thorney Island, which was a sizeable Air Station located near Portsmouth.  Norman was one of three Brits initially assigned to facilitate the stand up of 415 Squadron.  On arrival, Norman was given a note book, a pen and a desk in an otherwise empty hut.  He was to record the arrival of all Squadron personnel and provide logistic coordination – a daunting task as there were no assigned resources.  Over a relatively short period the nucleus of a Squadron took shape including the arrival of administrative staff.  At this point, Norman assumed supervisory duties related to aircraft maintenance.

Over the next six months he worked tirelessly to help bring six Beaufighters up to fighting strength.   Just as quickly as this task was accomplished and the Squadron crews achieved minimum readiness, the aircraft were re-allocated and new aircraft were introduced.  Over the next year Coastal Command moved the Squadron five times and the Squadron was constantly adjusting to new aircraft and new missions.  At the end of this period the Squadron found itself in St Eval flying Handley Page Hamptons.  Norman recounted a number of stories involving personalities and incidents that he remembers with remarkable clarity.   He said that once he went up for a flight in a Hampton.  The pilot flew the entire mission below 100 feet and Norman could see the wake the aircraft left in the water.  He said he was scared **** and that he never had another desire to fly.  He talked about the difficulty they experienced preparing battle damaged aircraft for subsequent missions and the carnage that was visible on many occasions.  He also had lots of stories concerning short leave periods in which trips to the local pubs led to some very interesting incidents.

Norman’s time with 415 Squadron came to an end when the Squadron moved to Bomber Command and became part of 6 Bomber Group stationed at East Moor in Yorkshire.  At this point Norman was eager to be stationed in the south of England so that he could be closer to his wife.  Although he enjoyed working with Canadians and had made many close friendships he had no desire to be stationed in Yorkshire and so his time with 415 Squadron came to an end.

I really enjoyed my time with Norman Scott and was pleased to welcome him to the 415 Squadron Association.  It was an honour to present him an Alumni Pin, which he quickly affixed to his blazer.  It was obvious that he was proud of his service record and time on 415 Squadron.  It was equally obvious that he enjoyed the visit as well.  It was also an interesting coincidence, that Norman and his wife Elsie will celebrate their 70th Anniversary at the same time as the Swordfish Squadron celebrates its 70th as well.