John McNeill was born on 15 April 1919 in Calgary, Alberta.  As a young man he worked on his father's farm before joining the Canadian Army in 1935, serving in the Royal Canadian Corps of Signals. In June 1940 while stationed at Kingston, Ontario, John was granted a discharge from his army unit and immediately joined the RCAF. Upon completion of pilot training, he was awarded his pilot's flying badge on the 5th of December 1941. At the same time he received his commission and was shortly thereafter sent overseas.

On arrival in the UK in early 1942, John was assigned to No.1 Flying Instructor School.  He then trained at No. 14 Advanced Flying Unit followed by No. 22 Operational Training Unit, where he and his crew qualified on the Vickers Wellington.    The crew was then posted to 426 Squadron on the 4th of November 1942. In June 1943, after completing a full operational tour, John was posted to No. 1679 Heavy Conversion Unit which was then located at RAF Station East Moor and where he flew the Lancaster.  During this time he instructed others and survived the crash of Lancaster DS635 at East Moor in Apr 1943.  In July 1943 he returned to 426 Squadron, he was awarded the DFC for service with 426 Squadron, Gazetted 13th August 1943 (presented at Buckingham Palace on 11th August 1944). The citation for his DFC reads "The fine fighting spirit displayed by this officer has been an inspiration to the rest of the squadron. He has taken part in many recent heavy raids on the Ruhr and on one occasion, in April 1943, completed his mission successfully although one engine failed while his aircraft was hotly engaged by the defences. As deputy flight commander he has rendered valuable assistance in the operational training of new crews and has contributed much to the high morale maintained in the squadron."

He was soon taken off front line operational flying for a period, being posted back to 1679 H.C.U. (becoming their chief flying instructor) and then to Boscombe Down, which was an emerging test and evaluation centre.  For a short period he returned to 6 Group with a posting to 433 Squadron in January 1944.  One month later he was sent to Bomber Command H.Q to serve on staff. On the 15th of July 1944, at the age of 25, he was appointed Commanding Officer 415 Squadron.  The Squadron had recently been transferred from Coastal Command to Bomber Command.  Unfortunately he was killed in a flying accident on the 21st of August 1944, when Halifax NA609 collided with Halifax MZ633.  Both aircraft crashed near West Haddlesey, Selby, Yorkshire.  Wing Commander John McNeill DFC is buried at Harrogate Stonefall Cemetery. 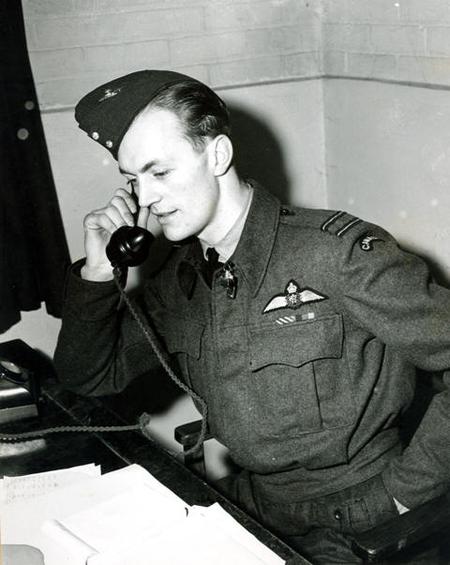