On 17 December 2020, the 14 Wing Commander, Colonel B. Cook, was informed that 415 Squadron had been selected by the CASI Senior Award Committee, as the recipient of the 2020 McKee Award.  This prestigious award was presented in recognition of work done to implement an interim beyond-line-of-sight (iBLOS) capability on the CP140M during Operation IMPACT.

Specifically, 415 Squadron led the way in the implementation of cutting-edge technology to enhance air power during combat operations.  As the Canadian Forces contribution to Operation IMPACT, the fight against ISIS, the 415 Squadron aircrew and maintainers worked tirelessly to make operations ready an iBLOS system on the CP140. Their efforts resulted in a capability that enabled the CP140 Aurora to stream real-time full-motion video to remote destinations anywhere in the world, thus increasing command situational awareness, and improving the overall intelligence, surveillance, and reconnaissance (ISR) picture.

Lessons learned from operating the iBLOS system and further technological advancements have allowed this capability to be permanently incorporated as part of Block IV, the final stage in the Aurora Incremental Modernization Program.  In today's air combat environment, integration and dissemination of information and intelligence products are key enablers for effective kinetic actions.  Full integration of BLOS technology will significantly enhance the ISR capability of the CP140M leading to enhanced combat effectiveness.

Clearly 415 Squadron has exemplified the professionalism, teamwork and leadership required to enhance airborne ISR operations in a combat environment, with their implementation of the iBLOS system.  The current 415 Squadron Commanding Officer, Lieutenant-Colonel Patrick LeBlanc, stated that he is confident that the talented group of military and civilian members of the squadron, many of whom were engaged with the iBLOS introduction, continue their cutting edge work as the CP140M Block IV program advances.

The 415 Squadron Association is very proud of those members of 415 (FD) Squadron, who made such a timely and considerable operational focused contribution.  It is wonderful that 415 Squadron is recognized for the good work it does.

The McKee Trophy, also known as the Trans-Canada Trophy, is awarded by the Canadian Aeronautics and Space Institute (CASI) to a Canadian citizen or organization, which has made an outstanding, contemporary achievement in aerospace operations, whether a single act within the year prior to the award or a sustained level of performance over a period of several years. The award was founded in 1927 by James Dalzell McKee (1893–1927) and is the oldest aviation award in Canada.  The picture below shows the figure atop the McKee Trophy.  An endowment provided by James McKee ensures that a replica trophy is provided to each winner. 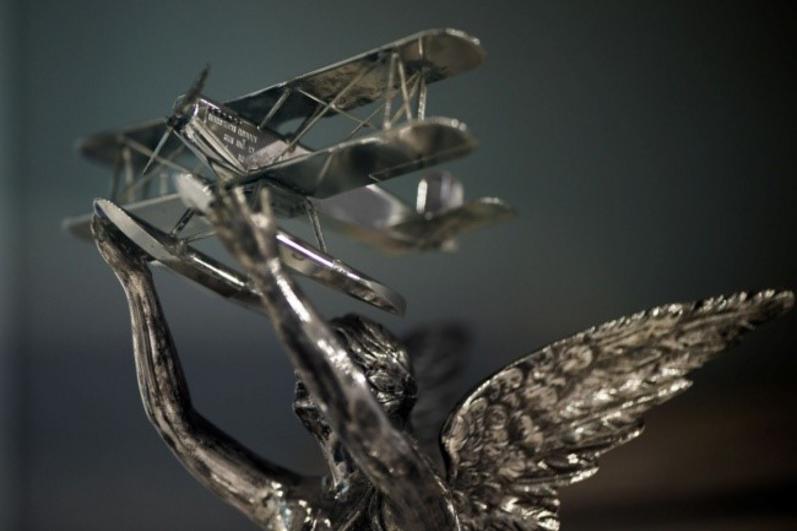