Born in Sault Ste. Marie, Ontario, LCol Patrick LeBlanc joined the CAF in 2001. Upon completing a degree in Mechanical Engineering at the Royal Military College in Kingston, Ontario, he under took pilot training. After achieving his pilot wings in 2008, LCol LeBlanc was posted to 407 LRP Squadron in Comox B.C. While at 407 Squadron, LCol LeBlanc held numerous positions including: Lead Pilot, Unit Flight Safety Officer, Pilot Standards and Training Officer and Instrument Check Pilot. During this tour, he deployed to numerous locations throughout the world to conduct operations and exercises.  It was at this time that he acquired the nickname “Panda”, which is recognized by most in the LRP fleet. While at 407 Sqn, LCol LeBlanc was also deployed on Roto 0 of OP MOBILE to Intelligence, Surveillance and Reconnaissance missions with the CP-140 Aurora over Libya.

In 2013, LCol LeBlanc was posted to 404 LRP & T Squadron where he instructed newly winged pilots on the Aurora.  After two years in this role, LCol LeBlanc was promoted to Major and became the Flight Deck Flight Commander at 404 Squadron overseeing training for all Aurora pilots and flight engineers. This timeframe also saw the introduction of the Block III Aurora aircraft and LCol LeBlanc took part in development and introduction of the initial training for aircrew on the upgraded aircraft. During his time as a Flight Commander, LCol LeBlanc deployed for six months to Kuwait, as the LRP Detachment Operations Officer for Roto 4 of OP IMPACT.  During this deployment he flew operational missions in support of coalition forces while managing the daily detachment tasks.

In 2017, LCol LeBlanc was posted to 405 LRP Squadron, as the Deputy Commanding Officer. During his short tenure at 405 Sqn, he deployed as the Air Task Force Commander for an anti-drug operation out of El Salvador.

In 2018, LCol LeBlanc attended the Canadian Forces College in Toronto, Ontario. He received a Master’s degree in Defense Studies upon completion of the Joint Command and Staff Program (JCSP). LCol LeBlanc was subsequently posted to NDHQ where he served as Chief of Staff for the Director General of Military Careers.

Promoted to his current rank, LCol LeBlanc was posted to 14 Wing Greenwood, Nova Scotia, where he took command of 415 LRP & FD Squadron. He and his team are currently working to bring the Block IV CP-140 online across the LRP community. 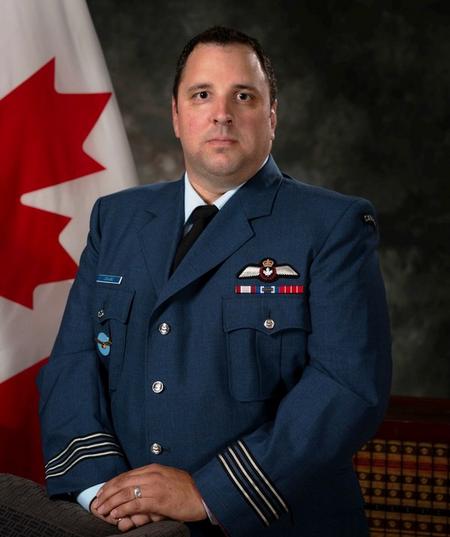