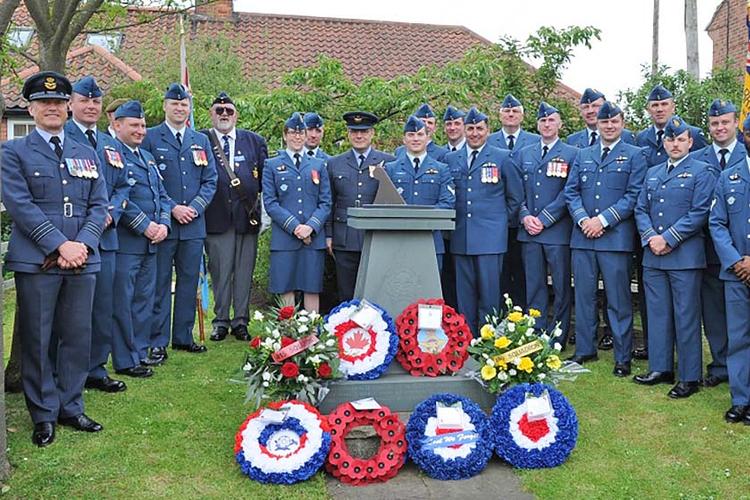 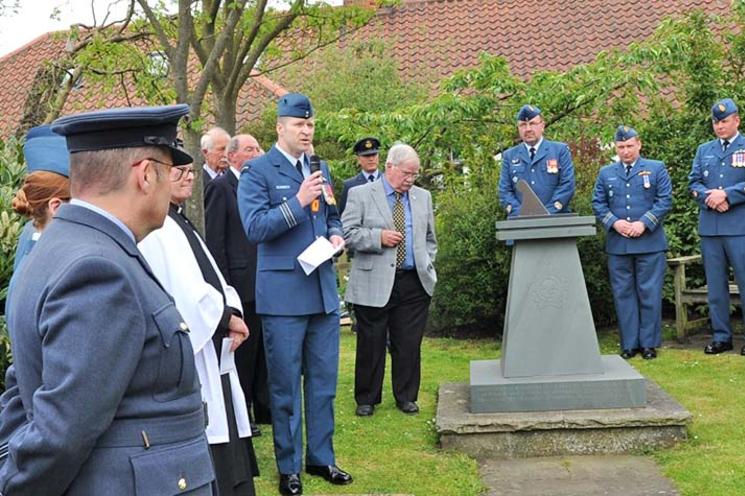 On Sunday, the 415 Squadron Contingent split into two groups.  The majority of the contingent attended the Church Service, while Maj Keith Fugger and Capt Kevin Matheson travelled to Runnymede to attend a memorial service.  The Church Service was held in the Sutton-on-the-Forest All Hallows Church, with readings conducted by Capt Roggenkamp and Capt Tagg.  After the ceremony, the Swordfish were intrigued to learn that the markings on the outside of the building were from people sharpening their swords and arrows.  Apparently, the citizenry had been ordered by the King of the time to practice their martial skills each week after church.  Maj Fugger and Capt Matheson attended the Commonwealth Memorial Remembrance Service at the Runnymede Air Forces Memorial on 13 May, as guests of the CDLS D/Air Attaché.  This service was dedicated to all RAF and Commonwealth personnel who have no known grave.  An RAF honour guard lined the route and the Canadian contingent was greeted by the parade Air Vice Marshall.  There were officers from various countries, such as a Malawi Infantry Brigadier-General and a RAAF Medical Officer.  Other VIPs included Mayors of London townships that were escorted by RAF honour guard personnel and laid wreaths.   The Lancaster from the Battle of Britain Memorial Flight performed several flybys at the end of the ceremony.

When not participating in one of the weekend events, the participating Swordfish had an opportunity to explore the local area.  Much of their time was spent in and around the City of York.  Visits were made to the impressive Minster, the York Shambles and the Viking Museum.  Tea and scones were enjoyed at the famous Betty’s Tea House and of course a number of local Pubs provided relaxing venues.

The 2019 Ceremony will mark the 30th anniversary of the East Moor Memorial Ceremony.  The event is scheduled for Saturday 18 May.  It is sincerely hoped that representation from both 415 and 429 Squadrons will again be present.

Information and pictures for this article were provided by Maj Keith Fugger, the 415 Deputy Commanding Officer, and Captain Niels Roggenkamp, the former 415 Squadron Historian.

​The East Moor Memorial weekend was comprised of three activities: a visit to the local primary school; the Memorial Ceremony; and a Church Service.  On Friday the 11th of May, 415 and 429 Squadron members were well hosted by the staff and students of Sutton-on-the-Forest Primary School.  The children were very polite and eager to learn about RCAF traditions, honours and medals.  Questions such as what does the Canadian Air Force do and how do these actions contributed to peace in the world were asked.  Although a small school, it was observed that there was tremendous spirit and a very positive learning environment was provided.  The children proudly guided the Canadians around their school.  The visitors were duly impressed.

The Saturday Remembrance Ceremony was held at the Sundial Memorial located in the Village Pound, which is centrally located at a “T” intersection.  The Ceremony was well attended by the local populace and a contingent from the 11th Air Training Corps.  The RCAF was represented by 19 members from 415 and 429 Squadrons.  The passage of vehicular traffic was a bit distracting at times but in spite of this, the Ceremony was conducted in a dignified fashion properly honouring those that made the ultimate sacrifice.  In his address to the crowd, Maj Fugger highlighted the sacrifices made and the bonds that continue today between the Squadrons and the Village, the RCAF and the RAF, as well as, Canada and the UK.  He thanked the village of Sutton-on-the-Forest for their welcome and kindness, the same that was shown to those that came to RAF East Moor so many years before.  Snacks and refreshments were provided by the Parish Council both before and after the Ceremony.  There was ample opportunity to engage the veterans who were present and the local citizenry who were incredibly welcoming and just plain nice people.  In attendance was 104 year-old Lena McKiddie, a ferry pilot during World War II.  She often operated from the East Moor airfield.  Although her mobility was slightly impaired, her wit was not!  Mention must also be made and a special thanks given to the volunteer coordinator of the event, Flight Lieutenant Alan Dolding, a member of 72 Squadron located at RAF Litton-on-Ouse.  A resident of Sutton-on-the-Forest, Alan’s support to the visiting RCAF contingents was appreciated.  He stated that he will continue to act as coordinator for the foreseeable future.