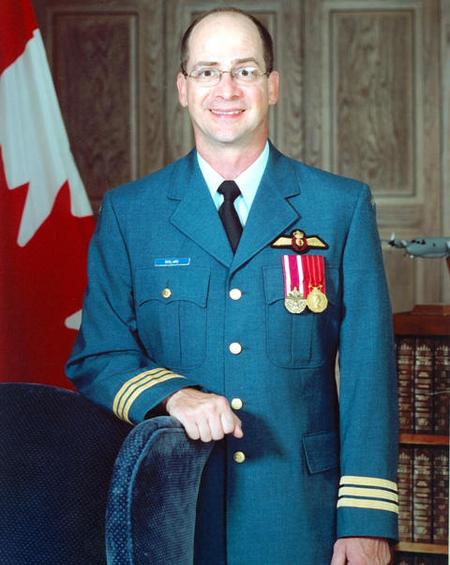 In 1981, Yvan Boilard graduated from Embry-Riddle Aeronautical University, in Daytona Beach, Florida with an Aeronautical Engineering Degree.  He joined Bombardier Aircraft, Montreal, and for two years worked as a liaison structural engineer.  He joined the CF in 1983 and qualified as an Air Navigator in 1984.  Posted to Greenwood Nova Scotia, he began his maritime aviation career at 405 (MP) Squadron, flying on the CP-140 Aurora.   In 1988, Capt Boilard was posted to Maritime Air Group HQ, Halifax, where he concurrently served as a member of the Maritime Air Standards Team and as a Fixed Wing Staff Officer, specializing in the field of underwater acoustics.

Promoted to the rank of Major in 1992 while attending Royal Roads Military College, Victoria, B.C., he obtained a Masters of Oceanography and Acoustics.  Returning to 14 Wing Greenwood in 1993, Major Boilard joined 415 (MP) Squadron where he served as an Acoustics Standards Officer, Maritime Patrol Crew Commander and Flight Commander.

In 1997, Major Boilard attended the United States Air Force Air Command and Staff College (ACSC) in Alabama. He remained on staff at ACSC for the next three years, teaching, developing and ultimately directing Aerospace Power history, theory and campaign planning courses. Promoted to the rank of Lieutenant-Colonel in 2001, he returned to NDHQ Ottawa, where he joined the Chief of the Air Staff Directorate of Strategic Plans.

In July 2003, LCol Boilard returned to 14 Wing Greenwood to command 415 (MP) Squadron. During this tour he was also member of the 14 Wing Project Transform Team, oversaw the development of the UAV/LRP manning concept of operations and commanded Operation Sirius in support of Operation Active Endeavour in Sigonella, Italy.

In 2005, LCol Boilard was posted to Central Command in Tampa, Florida, where he was employed as Deputy Director, Combined Planning Group, concentrating on Horn of Africa issues.  Promoted to his present rank in January 2007, Col Boilard was posted to Canadian Expeditionary Force Command in June 2007 where he initially served as J5 and then appointed CEFCOM Chief of Staff Support.  In 2009 he assumed command of 17 Wing Winnipeg where he served until May 2011.  Col Boilard has subsequently become a Canadian Defence Attaché and is currently serving in Brazil.