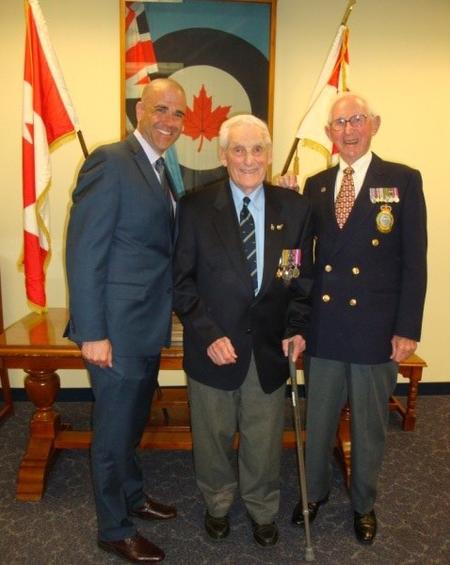 Parading of the 415 Standard

​On Saturday a number of local activities were available to engage participants.  In addition to a golf tournament, there was wine tour arranged as well as hosted tours of the Greenwood Military Aviation Museum.  Many participants chose to relax with old friends, as they prepared to attend the final celebration of the 75th Anniversary – a 1940s themed dinner and dance.   Those who attended this event were not disappointed.  More than 400 participants were treated to a great meal and almost continuous music from three bands, which alternated throughout the evening.  Speeches were kept to a minimum and there was ample opportunity to connect with old friends and enjoy a dance or two. 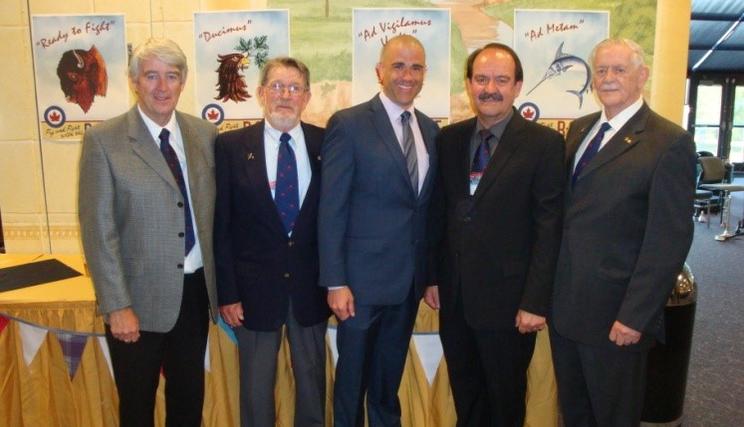 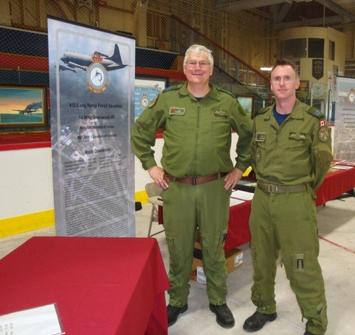 75TH ANNIVERSARY IS COMING TO A CLOSE

On the weekend of 23-26 June, the 75th Anniversary of the formation of 415 Squadron was celebrated at 14 Wing Greenwood.  In fact all the resident Squadrons stationed at 14 Wing were formed in 1941.  For approximately a year, a Wing Planning Group, which included representatives from 404, 405, 413, 415 and VPI, worked diligently to ensure this historic anniversary was recognized and celebrated in a memorable fashion.

All Squadrons and VPI were involved with the planning and execution of Anniversary activities.  With 415 Squadron active once again, the 415 Squadron Association was ready and willing to play a supporting role to the Squadron.  Drawing upon the experience gained at the 2011 Reunion, the Squadron Anniversary Committee produced a first-rate display, which was far superior to any other.  Captain Kevin Matheson and Captain Niels Roggenkamp supported by the 415 Squadron Association Executive were largely responsible for the design, and setup and staging of the display.  Sergeant Kimberly Smith was instrumental in ensuring a smooth registration process, which was used for all participants regardless of squadron affiliation.

The first Reunion activity was an extremely successful Meet & Greet hosted by VPI at the VPI Centre on Thursday 23 June.  More than 250 guests attended this sold out event, which proved to be a great success and set a very good tone for the weekend.  On Friday 24 June, the Squadron Standards were marched, industry and squadron displays were exhibited, and static aircraft including Canadian, German and American long range aircraft (LRP) were available for review. On the professional side, 14 Wing hosted an LRP symposium, to which attendance was restricted to current serving members.  That evening a TGIF was held at the 14 Wing Mess with more than 400 participants in attendance. 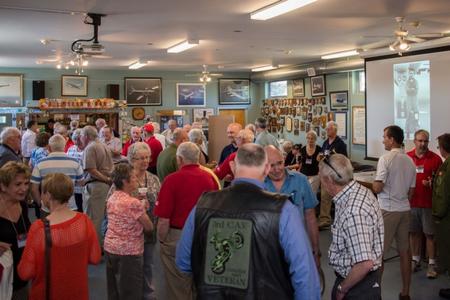 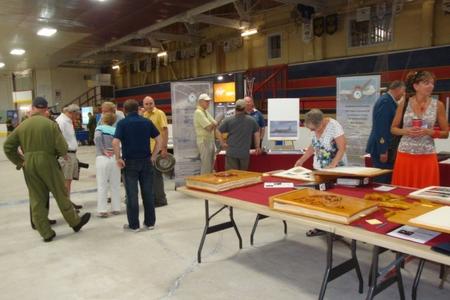 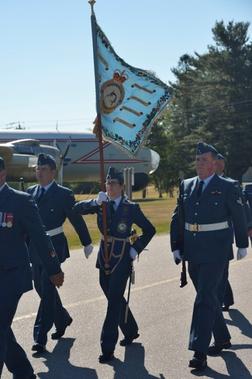 To close out the Anniversary celebration a late breakfast was offered at the Annapolis Mess and in the early afternnoon the Annual VPI Memorial Service took place.  A large crowd joined at the VPI Cairn to remember those who gave their lives in the service of their countries as maritime patrol aviators.

As the 75th Anniversary comes to an end, it is good to know that 415 Squadron has once again established itself as a leader in the Long Range Patrol Community.  The Squadron played a leading role in the planning of the Anniversary celebrations and received many accolades for a job well done.  The 415 Squadron Association was pleased to assist the Squadron throughout the planning and execution of this memorable reunion.  In addition, the decision to acquire fifty Squadron ties to mark the Anniversary proved to be a good move.  Morethan forty were sold and many of these were proudly worn at the Dinner Dance -  Swordfish pride was clearly visible to all in attendance.