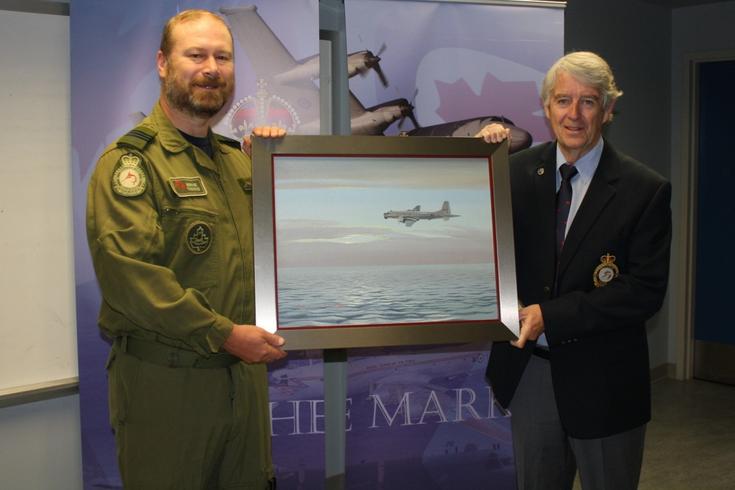 On Wednesday 19 June 2019, the Argus 10737 Bennett painting was presented to 415 Squadron at its weekly morning brief.  I provided a short historical summary of how the painting made its way to the Squadron and the Commanding Officer, Lieutenant-Colonel Bernie Thorne graciously received the painting on behalf of all Swordfish.  The painting is now mounted in the Squadron’s Briefing Room joining the existing collection of Bennett artwork held by the Squadron.

The 415 Squadron Association would like to acknowledge Chuck O’Neill’s thoughtful donation. 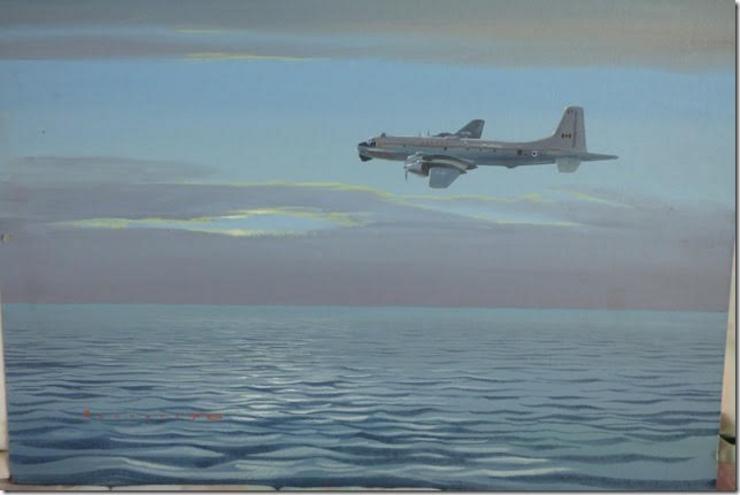 Before his passing, Geoff Bennett confirmed that this painting was actually given to Lorne Christensen, the First Officer of the Electra, which was hit by Argus 737.  The Electra was operating out of CFB Summerside at the time.  Of note, the painting had been completed in 1976, the year prior to the crash.

Over the years the painting had been damaged.  Chuck O’Neill advised that that there was a small hole on left side of the painting about half way down.  Also the upper right corner and across the top of the painting was somewhat shaky.  There was also a little wear on the fuselage aft of the engines, which seemed to be a rub of some type.  It was determined that the entire outer edge of the painting could be cut back about 1 inch or a mating could be used to correct most of the problems.  In either case, Geoff’s signature could be saved.  It was agreed that Chuck would forward the painting from his home on Vancouver Island to Nova Scotia and that the 415 Squadron Association would take care of any required restoration and framing costs.

In June of 2016 Chuck O’Neill, MWO AESOP retired, contacted me and advised that he had acquired a Geoff Bennett painting that might be of interest to the Association.  Always eager to view a Bennett painting, I was surprised to learn the history and the manner in which the painting was acquired.  The subject of the artwork was Argus 10737.

Swordfish from the Argus era know well that Argus 737 was destroyed with the loss of three lives on 31 March 1977.  The events surrounding this terrible loss are recounted in a previously posted story on this website.  One particular aspect of the crash was that it split apart an Electra aircraft, which was parked on the ramp at CFB Summerside.  This is mentioned because there is a connection between the crash and how Chuck O’Neill came to possess the Bennett painting.