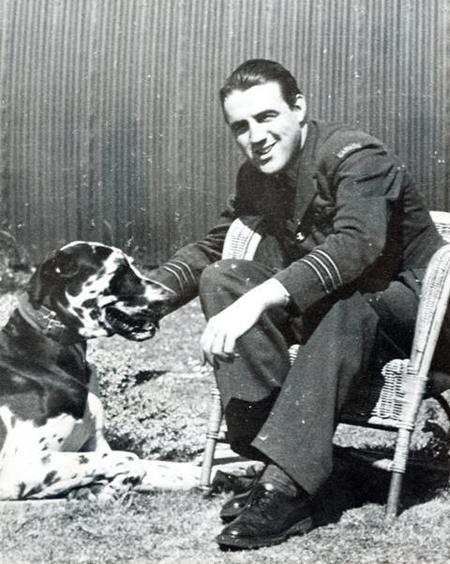 Edgar Louis Wurtele was born in Sault Ste-Marie, Ontario on 26 October 1913.  He spent most of his youth in Montreal where he graduated from Lower Canada College and took flying lessons at the Montreal Flying Club (St Hubert).  After joining the Royal Air Force, he arrived in England March 1935, earned his pilot “wings” and then was posted to #1 Fighter Squadron.  Shortly after, he was selected for the Hendon Air Display Team.

In 1937 F/L Wurtele was transferred to the Fleet Air Arm (Leuchars Airfield, Scotland) for training, then commenced operations on HMS GLORIOUS.  He flew “Swordfish” aircraft from Malta for two years, then a tour on HMS MALTA.  In 1939 (now S/L) he transferred to the RAF Advanced Training Squadron (RAF Grantham).  Later, with 86 Squadron RAF (a Coastal Command Unit), he participated in convoy escort and mine laying operations.

Wally was then posted back to Canada as the Chief Instructor at the RAF No. 32 Torpedo-Bombing Operational Training Unit (RCAF Patricia Bay), where he was later promoted to Group Captain and took command of the School.   While stationed at Pat Bay he met and married Lorna.   In early 1944 he was assigned command of RAF Station Dishforth a “6” Group airfield.  As an RAF wife, after D-Day Lorna was permitted to join Wally in Yorkshire.  At this time, Wally transferred from the RAF to the RCAF.   On return to Canada in late 1944, he was initially assigned to RCAF Station Lachine, where Prisoners of War were processed.  His final war time command was RCAF Station Patricia Bay.

Following the war, W/C Wurtele attended Air Staff College in Toronto, served at Trenton and then the new RCAF Station at St John’s Newfoundland.  Of note, he was involved in the formation of the RCAFA 150 (North Atlantic) Wing located in St John’s, NL in 1951, plus the formation of Air Cadets Squadrons across the province.   Returning to the RCAF Avenue Road site in Toronto in 1953, he was selected to be the Belgium, Luxemburg, Norway and Denmark Air/Army/Naval Attaché.  He returned to Ottawa in late 1956 and served in the RCAF Intelligence Branch until his untimely death from a brain tumour in 1960.