On the evening of the 12th, the crews of Squadron Leader Wilmot and Flying Officer Gue were assigned to a “special” mission.  The Squadron Operations Record for 13 Aug reads: “The “special” referred to yesterday was an attack on ‘Brunswick’, quite a hairy do [mission summary states they were attacked by fighters on the bombing run].  All returned safely, but S/L Wilmot’s kite was shot up – Stbd. Wing holed, port wing at trailing edge with a large gap, outside sixth of flap shot away, H2S shot up & several holes in bomb bay.”  Squadron Leader Wilmot’s action in this would lead to the award of a Bar to his recently presented DFC.

Sadly, two of those invested with DFCs by the King and Queen would meet a tragic end on 21 Aug 1944.  They had flown to Exeter to recover an aircraft after an engine change.  They were flying back to East Moor in a tight formation when the propeller of one aircraft flew off causing it to veer into the other.  Both aircraft, one piloted by Wing Commander McNeill and the other by Squadron Leader Wilmot, crashed near Selby, York.  All were killed.  It was a very hard blow to the Squadron, as all members were popular particularly the C.O. W/Cdr. McNeill and ‘A’ Flight Commander S/Ldr. Wilmot.  Clearly an example of how fate enters our lives.  There would not have been a collision if the propeller loss had been on the opposite side of the aircraft or if the aircraft had been flying in loose formation.

*Flight Engineers on RCAF squadrons were almost always from the RAF.

Squadron Leader Wilmot is buried in the Stonefall Cemetery, Harrogate.  In 1947,Wilmot Lake in Manitoba was named in his honour.  His DFC and Bar Citations read as follows:

“Flying Officer Brian Edmund WILMOT (Can/J.23777), Royal Canadian Air Force, No. 425 (R.C.A.F.) Squadron. This officer has completed many sorties during which he has attacked such well defended targets as Berlin, Frankfurt and Dusseldorf. One night in April, 1944, in a sortie against the last named target, Flying Officer Wilmot displayed the greatest determination in pressing home his attack although one engine failed and some height had been lost before reaching the target. His fine fighting spirit has always been apparent and he has set a most commendable example.”
[The London Gazette, 26 May 1944]

Since the award of the Distinguished Flying Cross, Squadron Leader Wilmot has completed numerous sorties against a variety of targets. On a recent operation against Brunswick, although his aircraft was attacked and severely damaged by enemy night fighters, Squadron Leader Wilmot displayed great skill and determination in pressing home his attack and in bringing his damaged aircraft safely back to base. He has set a worthy example.”
[The London Gazette, 27 Oct 1944]

The story was assembled by Captain Niels Roggenkamp a current member of 415 Squadron.

Brian Wilmot was born on 29th April 1923 to John Henry Allam and Bertha Alice Wilmot, of Winnipeg, Manitoba, where he would attend Kelvin High School and work for Trans-Canada Air Lines before enlisting in January 1942.  He completed his military flight training in Prince Albert, Saskatoon and Dauphin, and went overseas soon after February 1943.  He was posted from 425 Squadron to 415 Squadron on 16 July 1944 when the Swordfish transferred to Bomber Command.

The 11th of August 1944 was a day of celebration for No. 415 (Bomber) Squadron as flights of bicycles made their way into Linton to see the King and Queen present the Distinguished Flying Crosses (DFC) to Wing Commander J.C. McNeill, Squadron Leader B.E. Wilmot and Flying Officer H.J. Powell; and, to present the Distinguished Flying Medal (DFM) to Flying Officer R. McNamara and Pilot Officer A.W. Tinmouth.  The Squadron Operations Record the following day reads: “The occasion was well celebrated during the course of the evening.  After yesterday’s gala events & celebrations in the “locals” last evening, many were the groans over early calls this morning, although it was a grand morning and has been a grand day; warm & sunshiny, for we had an early op.” 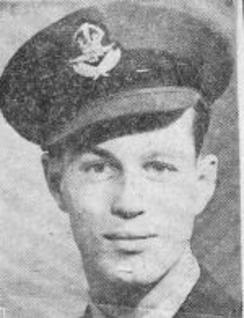