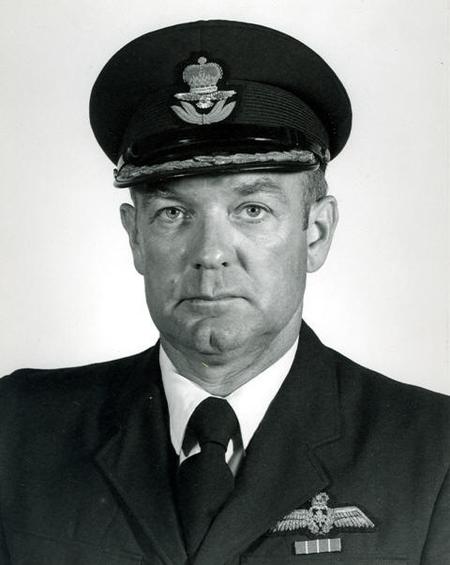 Born in Leiden, the Netherlands, in 1931, Jerry Van Ek immigrated to Canada following World War II.  In 1954 Jerry joined the Royal Canadian Air Force where he underwent pilot training as a flight cadet.  Upon graduation in 1956, he was assigned to #3 Service Flying Training School at Claresholm, Alberta, as an instructor on Harvards.  This former BCATP Airfield was now training pilots for NATO.  In 1958 Jerry transferred to #129 Acceptance and Ferry Flight located at Lincoln Park, Calgary.

Promoted to Flight-Lieutenant in 1961, Jerry became a Maritime Patrol Pilot serving in various posts at CFB Greenwood until 1966 when he was selected for test and evaluation exchange duties on the P3 at USN Station Patuxent River.  While on the exchange posting, Jerry was promoted to Squadron Leader, and was subsequently posted to the Maritime Proving and Evaluation Unit located at CFB Summerside in 1968.  He attended Air Staff College, Toronto, in 1971 which was immediately followed by a staff tour in the Air Requirements Directorate at NDHQ.

Jerry was promoted to Lieutenant-Colonel and in 1973 and assumed command of 415 VP Squadron, CFB Summerside.  Following a two year tour as Commanding Officer he was appointed SSO Maritime at AIRCOM HQs, Winnipeg.  In 1976 he was promoted to Colonel and assigned the duties of DCOS Operations, a position which he held for three years.  This was followed by another three year tour as Base Commander, CFB Moose Jaw.  In 1982 he attended the NATO Defence College, Rome Italy, in preparation for a follow-on assignment as Canada’s National Military Representative at SHAPE, Casteau Belgium, until 1986 at which time he retired from the Canadian Forces.

Still living on his retirement hobby farm near Sooke on Vancouver Island, Jerry has been involved in local government, has been a school trustee.  He is an active Rotarian with the Sooke branch and enjoys his time as a “Barbershopper” in Victoria.