During the early months the Squadron really began to establish itself as the operational voice of the LRP Force. Working with multiple external agencies to complete Aurora Incremental Modernization Project (AIMP) Block III and begin preparing for Block IV held most of the Squadrons attention. In addition to this, ongoing support to the establishment of an Interim Beyond-line-of-sight capability for Operation IMPACT, and test and evaluation of new software for the CP140M Integrated Mission System was continuously swirling in the background. The Squadron had established both a vision and mission statement and was well on its way as the Operational Test and Evaluation experts for the CP-140M.

As testing, force generating and operations were being supported the Squadron also began to re-establish its history with support from the Swordfish Association. Making the 10 Hangar Annex feel like home, visiting veteran’s at Soldier’s Memorial Hospital in Middleton, participating in Remembrance Day Ceremony’s in Bridgetown and planning the annual visit to Eastmoor for the memorial ceremony recognizing those members of 415 Sqn who flew from there during World War II. All highlights of mine during that first year.  Other activities which caught my attention was the competitive manner in which the squadron participated in Winter Carnival 2016 (Thunderstruck) and the 75th anniversary of all flying units in Greenwood during June of that year.

As we rolled through summer 2016 the Squadron was heavily focussed on support to AIMP and Op IMPACT. Multiple times the unit was asked to support other crews flying Op IMPACT missions and provide detachment staff in theatre. Then early in 2017 415 Sqn led a deployed crew for three months. The expertise and professionalism shown by all the Swordfish made my proud every day.

The past two years are ones that the Swordfish can be rightfully proud of.  Through hard work, professionalism and integrity, each member of the team has maintained an operational focus while contributing to the deliberate development and optimisation of the LRP Force capabilities.  It is without exaggeration that I can say that the Swordfish have led the LRP Force in the iterative enhancement of the CP140M capability. I could not be prouder to have been Commanding Officer of such a great team; a true family.

The past two years has been an incredible experience and dream come true. Since first
arriving in Greenwood in 1996 my desire was to be an LRP CO. On 5 Jun 2015, it was
with great honour that I accepted the Squadron Standard of the 415 Squadron Swordfish
and became its 30th Commanding Officer. As witnessed by the Battle Honours
emblazoned on the Colours, the Squadron has a proud history and I embraced the
challenge of guiding the Squadron through the start of a new era in its existence. The
re-creation of the Squadron did come at the cost of two units, the Maritime Proving and
Evaluation Unit (MPEU) and the 14 Software Engineering Squadron (14 SES), both of
which had proudly served the Long Range Patrol fleet for many decades. 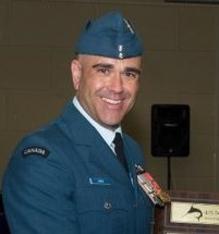