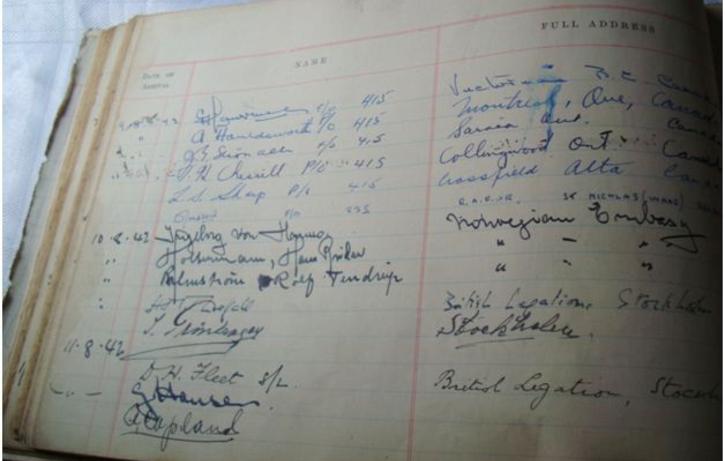 WHO’S BEHIND THE SIGNATURE

In March 2013, the 415 Squadron Association received a request to help identify five officers whose signatures were found in an old RAF Leuchers Officers’ Mess Visitors Book.  The book covers the period 1938 to 1966 and apparently contains approximately 3,500 signatures, many of which are illegible.  This artefact is now in the possession of Trevor Baker who resides in Warwickshire, UK.  He has undertaken the daunting task of identifying each individual who signed the book.  To date he has positively identified over 3,000 signatures.​

As shown above, five members of 415 Squadron signed the Visitors Book on 9 August 1942.  Their signatures are difficult to read, if not illegible.  There is insufficient information in each line entry to determine the actual name of the individual.  It was therefore necessary to conduct some research to help decipher the calligraphy.  The Squadron History and the Operations Record Book for August 1942 provided the necessary information to determine the person behind each signature.

Early in August 1942, the Squadron moved to RAF Wick (HQ and Maintenance Flight) and RAF Tain (“A” & “B” Flights plus groundcrew).  The Squadron had just completed a period of heavy operations and had lost five crews in the previous eight weeks.  On 6 August, W/Cdr Dennis assumed command of the Squadron and on 8 August he led a detachment of seven aircraft to RAF Leuchers in preparation for a future special operation.   Two of the aircraft captains were F/O Lawrence and F/O Stronach.  On 10 August at 2015, a formation of five Hampdens, equipped with torpedoes, took off from Leuchers on a strike mission against enemy naval units operating off the coast of Norway.  Unfortunately, at 2026, W/Cdr Dennis’ aircraft crashed into the North Sea when the starboard engine failed at low altitude.  All crew members, including P/O Houldsworth, survived the crash and managed to climb into their dinghy.  The other aircraft of the formation marked the crash location and attempted to redirect a merchant ship.  One crew remained in the vicinity until visual contact with the dinghy was lost due to darkness while the other three crews proceeded with their mission.  Later that night, all crews recovered at RAF Leuchers however one of the aircraft crashed upon landing.  This aircraft was completely destroyed but fortunately the crew came away unscathed.  The ditched crew, which was recovered the next day, landed in Aberdeen and immediately returned to RAF Leuchers.  Two days later, the detachment returned to RAF Tain and the Squadron was placed on a rest and rebuild cycle.  In early September the Squadron was moved to RAF Leuchers and resumed operations at the end of the month.

By referencing the Squadron Nominal Roll for August 1942 and Officers Duty List for the same period it has been determined that the signatures in the Visitors Box belonged to:

P/O Lorne Smith Sharp - Wireless Operator/Air Gunner on F/O Lawrence's crew. He was the Squadron Entertainment Officer. He died in 1996 and is buried in the Three Hills, Alberta.

Trevor Baker was grateful to receive the Association’s input and has recently advised us that he has deciphered 25 more signatures.  He continues to be astonished by the discoveries he makes each time he starts work on a new page of signatures.