Following a period of conversion, on 14 February 1942 P/O Sargent qualified solo on the Blenheim and on the 16th he qualified on the Hampden.  Shortly thereafter his crew was formed, which included P/O Edwards as Navigator and F/Sgt McWilliams and Sgt Conway as Wireless Air Gunners.   Flying from RAF Station Thorney Island, the Sargent crew commenced operational training.  The Squadron moved to RAF Station St Eval in April 1942; however they were quickly returned to Thorney Island.  By mid-April the Squadron had received its initial allocation of 20 Hampdens.  At that time it was routine for crews to detach and operate from multiple coastal stations, whilst they continued to enhance crew readiness.

415 Squadron’s first real contact with the enemy occurred on 29 May 1942.  Operating from RAF Station North Coates, two formations consisting of three crews set out on an anti-shipping strike along the Friesland Islands.  The first formation led by the Commanding Officer, W/Cdr Wurtele, did not locate any targets and returned safely to base.  The second formation, which included Sargent’s crew, located an enemy convoy and attacked the largest ship.  Violent evasive action was required in the face of intense flack.  It was observed that a cloud of smoke could be seen rising from the bow of the targeted ship, which was claimed as damaged.  Unfortunately the convoy was heavily defended and P/O Sargent’s crew failed to return.  The other aircraft in the formation were struck by flak but got away.

P/O Sargent’s crew was initially declared missing following the 29 May attack – he was 26 years old.  On the 24 August a report from the International Red Cross Society located in Geneva, quoting a German report, notified that the body of P/O Sargent had been recovered from the North Sea.  He and his crew were officially presumed dead on the RCAF Casualty List dated 2 November 1942.  P/O Sargent’s burial location is unknown.  He is remembered on Panel 99 on the Runnymede Memorial, Surrey, United Kingdom.

Information for this article came from the following sources:

Swordfish – The Story of 415 Squadron

David Herbert Sargent was born in Montreal Quebec and graduated from Westmount High School in 1933. David wrote in his yearbook that his ambition was to get a higher level of education.  His friends used to call him Sarge and his favourite expression was a very normal Canadian “Eh”. He enjoyed playing bolo ball and basketball as school activities.  David studied at McGill University and worked at the Bank of Toronto before joining the RCAF in 1940.  He trained at No. 8 EFTS Vancouver and at No.5 AOS Winnipeg ultimately earning his wings at No.3 SFTS Calgary.  This was followed by a course at No. 31 General Reconnaissance School, Charlottetown.  David was posted overseas in September 1941 and joined the newly formed 415 Torpedo-Bomber Squadron on 4 November 1941. 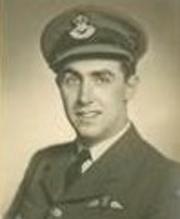