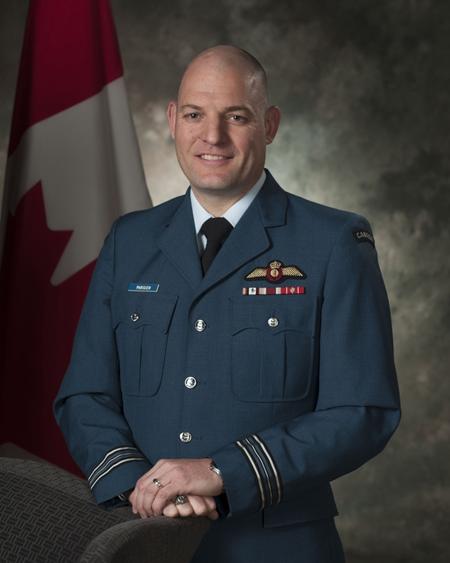 Major Serge Parisien joined the CAF in 1991 attending CMR St Jean and RMC Kingston, graduating with a BSc in Physics in 1996. Following the awarding of his Air Navigator Wings in April 1998 Maj Parisien was posted to 415 Maritime Patrol Squadron where he spent seven years as an Acoustics Sensor Officer, Tactical Navigator, and Crew Commander including a deployment on Operation APOLLO. Following amalgamation in June 2005, Maj Parisien was begrudgingly absorbed by 405 Squadron for a very long year, after which he welcomed a five year posting to 1 Canadian Air Division HQ where he was a staff officer for Maritime Patrol systems and readiness. In 2011 Major Parisien was posted to the Canadian Forces School of Aerospace Studies where he was fortunate enough to instruct in the airworthiness curriculum as well as run the new UAV program supporting the Aerospace Systems Course and the Operational Test and Evaluation Project Officer Courses as the Training Support Flight Commander.

In 2013 he was posted back to 14 Wing as the Projects Flight Commander and later, DCO of the Maritime Proving and Evaluation Unit. In June 2015, ten years after securing the Swordfish Colours in the Greenwood Military Aviation Museum Maj Parisien proudly carried them back onto parade for the reformation of 415 Squadron where he has since held the positions of Officer Commanding Long Range Patrol Test and Evaluation Flight and Deputy Commanding Officer. He also deployed to the Combined Aerospace Operations Centre in Al Udeid, as the Air Task Force Iraq Coordination Element Director supporting Operation IMPACT.

Major Parisien commanded 415 Squadron for two months prior to his posting to the RCAF Aerospace Warfare Centre (RAWC).  He is currently co-located with 415 Squadron AT 14 Wing Greenwood, as the RWAC Capability Development Officer for Long Range Patrol.