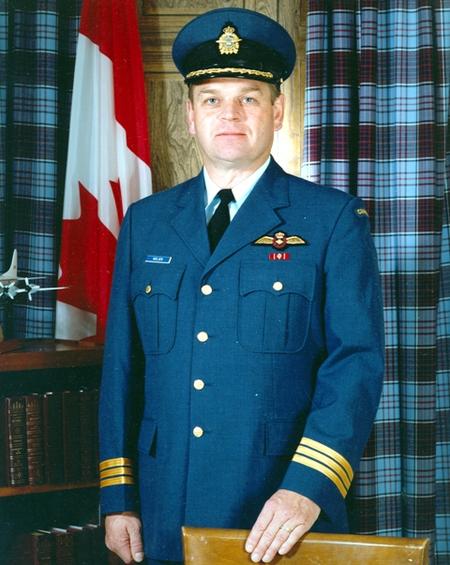 Art Nielsen was born in Denmark and immigrated to Canada in 1958 at the age of fourteen.  He joined the RCN in 1962 under the ROTP Plan, spending four years at RMC earning an Electrical Engineering degree.   He received his Navy Pilot wings at CFB Portage La Prairie in 1967.

His first operational squadron was VS 880 at Shearwater, where he flew the CS2F (Tracker) from shore as well as from HMCS Bonaventure.  Then followed two years on exchange duty with the US Navy in Norfolk, Virginia as an Exercise Analyst.  In 1972, he returned to VS 880 as the ASW Officer and Deputy Flight Commander.

Promoted to Major in 1973, he moved to 3 CFFTS, Portage La Prairie, where he commanded the Primary Flying Squadron and instructed “ab initio” pilots on the Musketeer.  In 1977, he attended the Royal Air Force Staff College at Bracknell, UK, and upon graduation served on the Directing Staff at Canadian Forces Staff School in Toronto.

Following a year of French language training in 1981, he joined the Maritime Patrol community in 1982 with a posting to 415 Maritime Patrol Squadron, in Greenwood.  He flew the CP-140 Aurora as co-pilot and Crew Commander, and he served as Squadron Operations Officer.

In 1986, he was appointed Commanding Officer of VU-33 at Comox, a small squadron operating both the Tracker and the T-33.  This tour was cut short in 1987 by promotion to Lieutenant-Colonel and appointment as SSO Fixed Wing Readiness at Maritime Air Group Headquarters, Halifax.  In 1989, he returned to Greenwood, this time as Commanding Officer 415 Maritime Patrol Squadron.   Highlights of this appointment included:  Victory in the Fincastle ASW competition, command of a four-aircraft deployment in support of OP FRICTION (First Gulf War), and deployment of the entire squadron to Bermuda for an exercise.

In 1991, Art was promoted to Colonel and posted to the Joint Staff at NDHQ as Director of Operational Training and NBC Defence.  Then in 1994, he assumed the duties of Chief, Exercise Division at NORAD Headquarters in Colorado Springs.  He retired from the Canadian Forces in 1996 after 34 years of service.

Art is married to the former Carol Lee Holley of Norfolk, Virginia and they have two sons.  They remained in Colorado Springs after retirement, and they still reside there.