Joseph Hector Lucien Lecomte was born at St Theodore d’Action, Quebec.  His primary school years were spent in St Theodore and his secondary studies were completed at the Seminary of Saint-Hyacinthe.  Joe was a university student in Montreal prior to his enlistment in the RCAF on the 9th October 1939.  He graduated as a pilot from No. 1 Service Flying Training School (SFTS) at Camp Borden, Ontario.  He then served as a flying instructor at the following RCAF SFTS locations: No.4 Saskatoon, No.13 Saint-Hubert and No.5 Brantford.

In 1942 Flying Officer Lecomte was sent to England where he completed additional training before joining 425 (Bomber) Squadron – the first French Canadian squadron.  He was promoted to Squadron Leader and in May 1943 he deployed with the Squadron to North Africa, from which Joe participated in the Italian Campaign.  At the end of his first operational tour he was promoted to Wing Commander and assumed command of 425 Squadron on 22 May 1944.  He oversaw and led many bombing missions during this tour.  On 21 August 1944 Wing Commander Lecomte was moved to command 415 Squadron, which had just suffered the tragic loss of their Commanding Officer.  Leading from the front, he continued to fly many missions over enemy occupied territory against heavily defended targets.  In October 1944 he was awarded the DFC for his skill and valour.  Promoted to Group Commander he was assigned command of RAF Station Tholthorpe, which was home base for 420 and 425 Squadrons. It was during this period that he became affectionately known as “Joe the Group”.  He was the most senior ranked RCAF French Canadian serving in the UK/Europe and was often “Mentioned in Despatches”.

In April and May 1945, 420 and 425 Squadrons converted to Avro Lancaster aircraft.  They then flew their planes to RCAF Station Debert in June 1945.  At the same time Group Captain Lecomte returned to Canada and assumed command of Debert.  The intention was to form No.663 Wing as part of “Tiger Force”, the new Allied Long Range Bomber Force.  The plan was cancelled with the surrender of Japan and the Squadrons disbanded on 5 September 1945.  Joe subsequently commanded RCAF Station Camp Borden and later RCAF Station Grostenquin, Metz, France.  In 1947 he was decorated with the Croix de Guerre with Silver Star.

During the 1950s the RCAF was once more in a build up period.  Joe was called upon to command 423 Squadron, a new jet interceptor unit as it re-activated at RCAF Station St Hubert and later 432 Squadron as it re-activated at RCAF Station Bagotville.  He retired in December 1966.  Unfortunately he was killed in an automobile accident on 18 December 1975 at Saint-Bruno, Quebec just 30 miles from his home in Acton Vale.  He was buried in the “Field of Honour” at Pointe Claire, Quebec.  The airport located at Canadian Forces Base Valcartier is named in his honour. 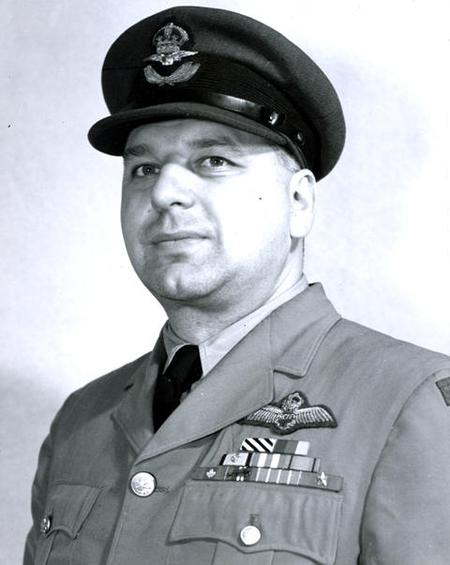