In his retirement he became involved with genealogy and was able to prove descent from five United Empire Loyalists. This earned him the honorific designation of U.E., Canada's only hereditary title. He was an active member of the local branch of the United Empire Loyalists of Canada, holding several executive positions. He was also a member of the Vancouver Island Aircrew Association, a life member of the Association of Professional Engineers and Geoscientists of BC as well as the Association of Professional Engineers and Geoscientists of Saskatchewan. He was awarded the Queen's Diamond Jubilee Medal in 2012.

A gathering of remembrance was held in Victoria on April 8th.

The 415 Squadron Association was recently advised that one of the very few remaining WWII Swordfish Veterans, Alvin Huffman, had recently passed away.  Since 2015, he resided at the Broadmead Lodge in Victoria, British Columbia.

Al was born in Windsor, Ontario to Donald and Katherine (Bailey) Huffman. He leaves his wife of 67 years, Joyce (Smale), their three children Robert (Sheila), Janet and Catherine, their three granddaughters Emily, Stephanie and Alexa, and his brother Bruce (Kay).

An RCAF pilot during WWII, Flying Officer Al Huffman and his crew joined 415 Squadron at RAF Station East Moor.  He flew the Halifax bomber and completed six operational missions before the Squadron was stood down.  Al was one of two surviving members of his crew.  After the war, he enrolled at the University of Toronto and graduated with Honours, as a Chemical Engineer in 1949.  Al had a varied career and lived in many locations across Canada, ultimately becoming the President of CSP Food Services Limited.  He retired in Winnipeg, Manitoba.  In 1992, he and his wife decided to enjoy a milder climate and moved to Saanich near Victoria. 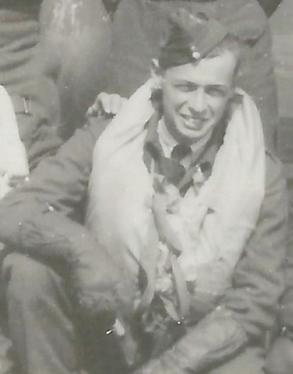