Members from 415 and 429 Squadrons with the students from the Sutton-on-the-Forest School.

​As in previous years, the members visited the local school Friday afternoon. The children asked many interesting questions as the members explained their backgrounds, occupations and the relationship of our Squadrons with Sutton-on-the-Forest. They then accompanied the students outside as they participated in the Walk 4 Wildlife in an attempt to set a new Guiness World Record for the most people walking at the same time for an organised event. After the walk, the Grade 6 students took each member separately around the school for a private guided tour. Special thanks to Mrs. Botham, the School Head Teacher, for her outstanding support throughout the years – best wishes and a happy retirement after the school year ends!

415 Squadron, along with 429 and 432 Squadrons, was based out of Royal Air Force (RAF) Station East Moor from July 1944 to May 1945, when it was disbanded. With almost 1,800 Canadian and British service personnel stationed at East Moor through the height of the war, a signiﬁcant presence was felt throughout the nearby village of Sutton-on-the-Forest and Royal Canadian Air Force (RCAF) members were soon considered “family”. Each year, during the Victoria Day long weekend, a Family Memorial Service is held in Sutton-on-the-Forest.

Established in 1990, by Canadian veterans of the RCAF Squadrons stationed at RAF Station East Moor during the Second World War, the annual event is held in remembrance of the 640 RCAF aircrew who lost their lives during operations flown from the local airfield. The Station was located just a few miles outside the village and the RCAF personnel largely outnumbered the residents who welcomed them in their homes, church, halls and pubs.

This year, 415 and 429 Squadrons sent a larger contingent of personnel to attend the East Moor Family Memorial Service which took place on Saturday 20th of May 2017. To the immense pleasure and gratitude of the village of Sutton-on-the-Forest, 15 Royal Canadian Air Force (RCAF) members were able to make the trip over to the United Kingdom. Notably, both former 415 and 429 Squadron Commanding Officers (CO), Lieutenant-Colonel Jeff Davis and Lieutenant-Colonel Bill Church respectively, were able to attend the ceremony.

The events of Saturday began with a lunch reception at the lovely home of Parish Councillor Mr. Willie Anderson just a short distance down Main Street from the Memorial. The RCAF members were joined by Mr. Mike Rigby; Mr. Bob Shearman, Chairman of the Parish Council; Group Captain Keith Taylor, RAF Linton-on-Ouse Station Commander; and Flight Lieutenant Alan Dolding, the main point-of-contact for the event. Following the reception, the ceremony took place in the Village Pound.

Many braved the inclement weather to attend the memorial. Despite the rain, a three ship formation of Grob Tutor T1 from Linton-on-Ouse performed a fly-by. Both COs laid a wreath in honour of their respective Squadrons and gave speeches highlighting the importance of the memorial. After the ceremony, tea and desserts were offered in the village hall where the members had the chance to share stories and anecdotes with the residents of the village.

This year’s visit was a great success thanks to Flt Lt Dolding who stepped up to organize the ceremony which had been the responsibility of Mr. Rigby for many years. The RCAF members were once again so warmly welcomed by the community, and already look forward to their next visit! 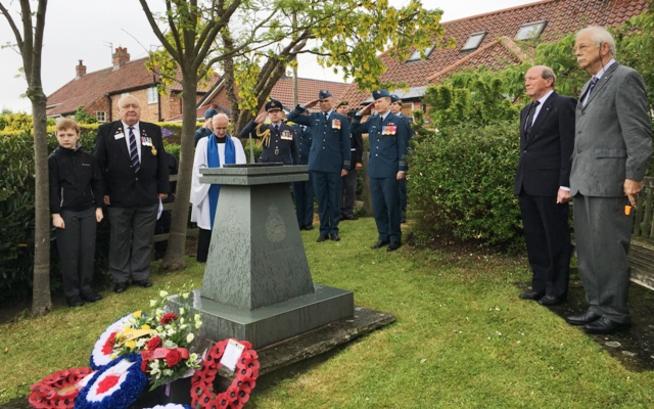 Following aircrew customs and with the blessing of the School, LCol Jeff Davis and Capt Jocelyn Gaudette zapped the building! 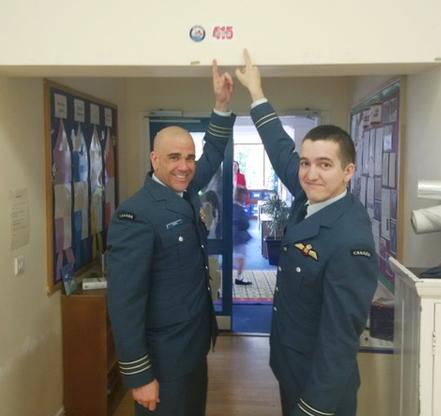 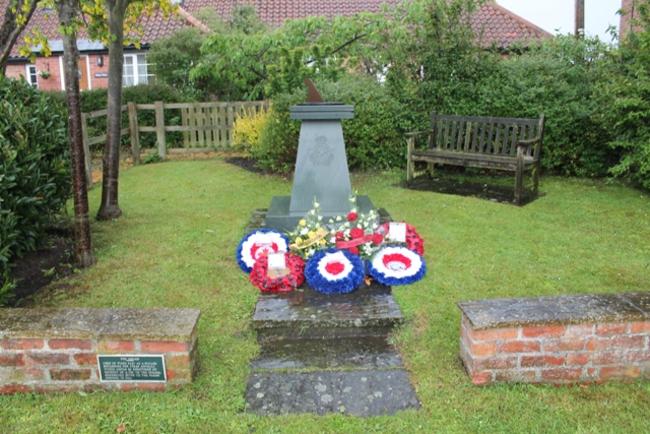 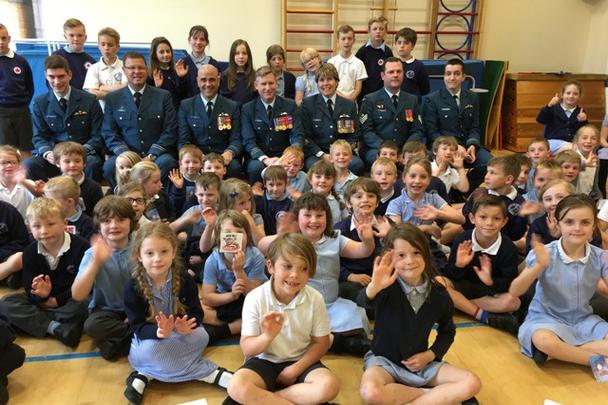