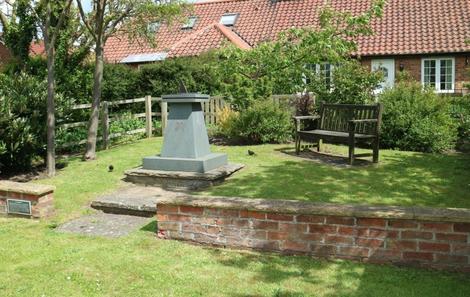 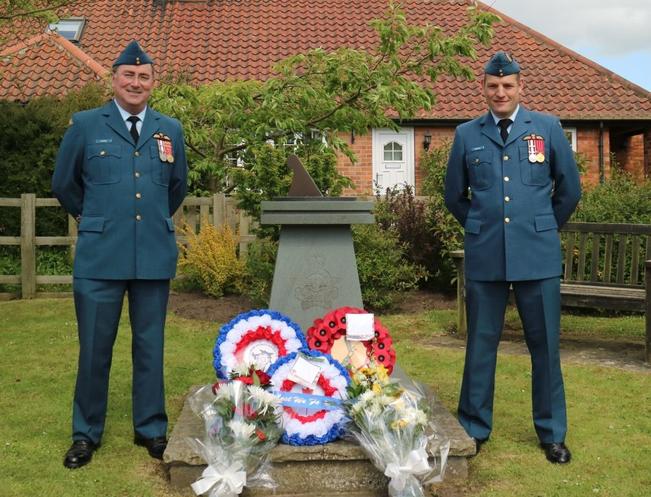 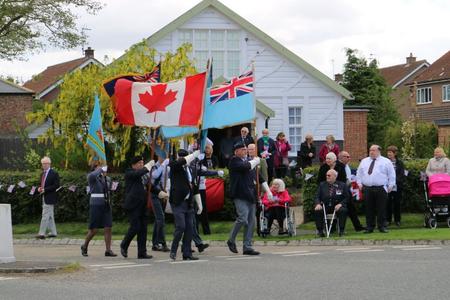 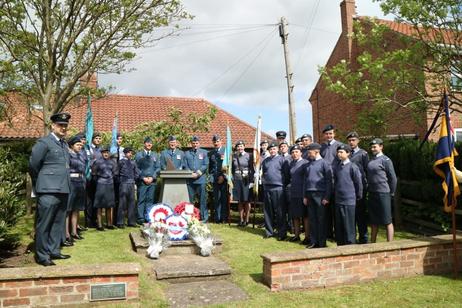 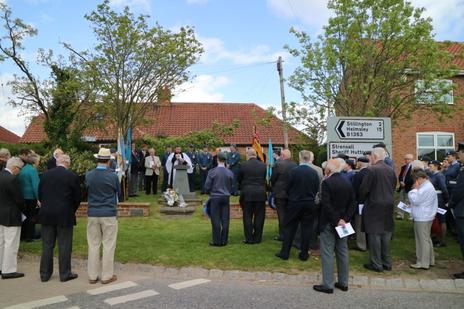 East Moor ceased flying operations in May 1945, as the war in Europe came to an end.  At that time nearly 1800 Canadian and British servicemen and women were stationed at the airfield, which was located a short distance south of the Village of Sutton-on-the-Forest.  Early in 1990 Canadian veteran aircrew and ground staff subscribed to and built a war memorial in memory of the 640 who flew out of East Moor never to return.   A sundial cairn was erected in the Village Pound located at the end of Main Street.  The Pound was used in times past as a walled enclosure for stray animals, which could be recovered on paying a small fee to the “pender”.  The Pound was generously given to the Parish Council in 1953.  In turn the Parish Council gave permission for the Cairn to be erected in this prominent village location located across the street from the Village Hall.  Faithfully there has been an RCAF presence at every memorial service held since the cairn was erected.  Originally these services were organised by the veterans themselves; however, with the passage of time their numbers have dwindled and as a result the Parish Council has taken over this responsibility.

For the 25th East Moor Ceremony two representatives each from 415 and 429 Squadrons attended the service.  The Village has once again expressed how grateful they are that these serving members of the RCAF were authorized to participate.  The Squadron representatives had an opportunity to meet the pupils of the village school and tour Sutton Hall, which served as an Officers’ Mess during the war.

Planning is ongoing for the 2016 Ceremony, which will be held on Saturday 21 May.  The 415 Squadron Association wishes to acknowledge the tremendous work of Mr. Mike Rigby and the Parish Council of Sutton-on-the-Forest as well as the hospitality they offer annually to visiting Air Force personnel.

415 Squadron representatives were WO Pat Henry and Major Serge Parisien, who provided the opening address for the Memorial Service (see below).