An adventurous lad, Flight Sergeant Boyd Allison Dakin was born 20 February 1921 in Berwick, NS.  Before the war, he worked as a mechanic, likely in his father’s garage and service station.  He enlisted in the RCAF on 22 Oct 1940.  ‘Duke’ Dakin would head overseas in 1941, where he would join 415 (Torpedo Bomber) Squadron in its early days flying as Air Gunner in the crew of Flight Sergeant I.W. Garfin.  Along with being one of the crews to participate in the Squadron’s first anti-submarine mission, the crew was one of the first to engage with the enemy, as outlined in the Squadron Operations Records and a press release that was published in Canadian newspapers:

“Two formations of Hampdens loaded with “B” bombs set out on shipping strike along Friesland Islands, in action with flights from two other Squadrons…At 0019 the second formation sighted enemy C/V and attacked. At 0032 P/O Lawrence attacked largest ship in convoy and stick of bombs laid across bow one length in advance. Two minutes later F/Sgt. Garfin carried out similar attack on same ship. Violent evasive action was required by both aircraft due to intense heavy and light flack.  Both were struck but got away.  Air Gunner of T [P/O Lawrence Hampden] observed cloud of smoke on bow of ship.  No results noticed by V [F/Sgt Garfin Hampden] due to violent flack and Air Gunner blown off seat by explosion.  Ship claimed as damaged.  Hampden R captained by P/O Sergeant Navigator P/O Edwards, Air Gunners Sergeants Conway and McWilliams, lost formation and failed to return; overdue action taken 0413/30.  The convoy attacked was heavily defended and intense barrage of flack made attacks particularly hazardous. Crews of a/c engaged deserve credit for good showing under the circumstances.”

“The first torpedo squadron of the Royal Canadian Air Force has had its first brush with the enemy after a long period of hard, but unexciting, patrols as coastal command unit.
Two aircraft of the Squadron (415), which is commanded by Wing Commander E.L. Wurtele of Montreal, took part in a recent strike against enemy shipping off the Dutch coast…

The second aircraft to strike at the enemy vessel was piloted by Flight Sergeant I. (Izzie) W. Garfin of 10133-116th Street, Edmonton.  Garfin is a graduate of the University of Alberta and gave up a reserve commission gained through a COTC course to go into the air force.  His aircraft went in at a higher altitude and the crew observed hits as they swept through a hail of flak to their target.  The plane was hit but got home safely.  It was the first strike for both crews and they claimed a probable between them.  Other members of Skipper Garfin’s crew were, Flight Sergeant Tom Billard of Dartmouth, N.S.; Sergeant Boyd ‘Duke’ Dakin of Berwick, N.S. and Sergeant Doug. Pearce of New Westminster, B.C.”

Not mentioned in the press release was the fact the crew of Pilot Officer David Herbert Sargent would be the first Swordfish to fall to enemy action.  The next month, on 27 June 1942, the Garfin crew, too, would fall to enemy action.  The circumstances were reported in the mission summary of Flight Sergeant McComb’s crew:  “In formation with Hudson B/59 and 3 Hampdens former carrying Flares and latter, torpedoes. AT2359 off Borkum sighted convoy and in formation with U/415 [F/Sgt Garfin crew] flew into position for attack from landside. No flares dropped due to low cloud base and two Hampdens lost contact with C/V.  While resuming search, encountered heavy flak from land and P lost contact with U. S/E. for base after violent evasive action.”

At this time of remembrance, we remember F/Sgt Dakin who died at the age of 21 whilst engaged on operations with 415 Squadron.  He is buried at the Vredenhof Cemetery located at Schiermonnikoog, Friesland Islands, The Netherlands.  He was the son of Son of Boyd Allison Dakin and Alberta Brandon Dakin, of Berwick, King's Co., Nova Scotia.  This article was produced by Captain Niels Roggenkamp of 415 Squadron. 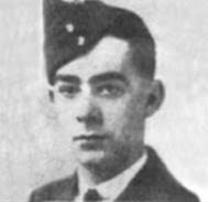