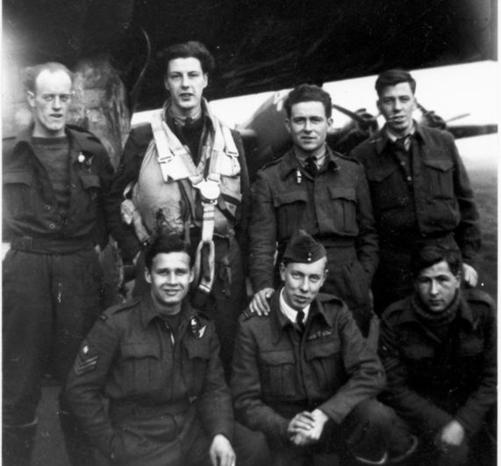 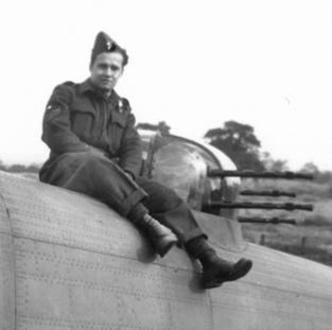 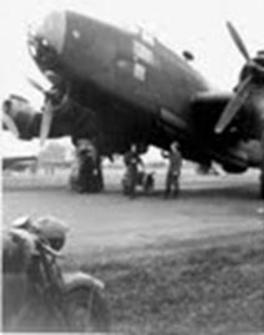 Don Hunt was born in Kingston Ontario on 23 December 1923.  He enrolled in 1943 and trained as an Air Gunner joining 415 Squadron at East Moor on 21 August 1944.  He was assigned to Clarence “Jim” Chartier’s crew, with whom he flew his entire tour (30 missions) as Mid-Upper Gunner on Halifax Mk IIIs (see photos below).   He completed his tour on 01 February 1945 and subsequently returned to Canada.  Don re-enlisted in the RCAF after the war as an Aero-Engine Tech.  He worked in Ottawa on Beach 18 Expediters and moved to Sabres.  He left the RCAF as a WO II in 1957.  Don moved to London and initially worked for The Kalvinator Appliance factory as a Tech Rep.  Subsequently he joined a few different companies in Southern Ontario dealing with appliance repair until he retired.  Don joined the 415 Squadron Association in 2012.  He was a resident of the Veterans Wing of the Parkview Hospital located in London, Ontario.

The Crew Commander, F/L Clarence Chartier was awarded the Distinguished Flying Cross.  The citation simply stated “in recognition of gallantry and devotion to duty in the execution of air operations against the enemy”.  At this point the crew had completed 18 missions (91 hours 55 minutes) involving attacks on a wide range of targets in Germany and Northern France as well as numerous mine laying operations.  This award was recommended on 22 November 1944.  Such recognition could easily have been applied to the entire crew, which of course included Don Hunt (see photo above).

Don never returned to East Moor but over the years he did stay in touch with fellow crew members.  The last surviving member of his wartime crew, Don passed away on 20 May 2016.    We thank him for his service as a Swordfish and for sharing part of his war time experience with The 415 Squadron Association.

Information for this article was gathered through correspondence with a nephew of Don Hunt, Brent Elgie, a conversation between Chris Henneberry and Don Hunt and reference to “The East Moor Experience” written by Brian Shields.

It is interesting to note that Don arrived at the East Moor airfield on the same day that tragedy struck both the Station and 415 Squadron, when two crews and thirteen ground staff were killed in a mid-air collision.  Wing Commander J.G. McNeill, DFC the Squadron Commanding Officer and Squadron Leader B. Wilmot DFC collided whilst in transit between Exeter and East Moor.  On this black day, 415 Squadron lost their CO, Bombing Leader and Navigation Leader.  As a result of the accident over the next month there were multiple changes on the Squadron as well as the stand up of new crews including Chartier’s, of which Don was a member.

In a recent discussion with Don he recalled that during one of his missions his crew experienced a mid-air with an enemy fighter.  While their aircraft LL575 – 6U “A” sustained some damage, none of the crew members were injured.  Following a brief status report from Chartier the crew as a whole decided to complete their bombing mission.  They returned home safely and LL575 was repaired.  The majority of Don’s missions were flown on that aircraft, which was known as “Archie the Archer”.  Of note, the nose art from this aircraft is on display at the National War Museum in Ottawa.

On another mission they were going through heavy flack. Don said he actually saw a chunk of flak go in one side and pass out the other side of the fuselage right in front of his upper turret. At this point he called the Captain over the intercom and asked him "if he was sure he was going the right way". They were also jumped by fighters that night but made it back with no injuries to any of the crew. Usually when they returned from a night mission it was still dark out and hard to see the aircraft. The following morning after breakfast they went out to look at the Halifax in the daylight. He said they counted over EIGHTY holes that had passed through the fuselage. He added that "the flack holes were sharp and jagged, but the bullet holes were always smooth and round" . There were more close calls. One night they were near the target and in heavy flack. The navigator had a small table for plotting and had just set his pencil down when the aircraft buffeted and his pencil rolled off the table. He bent down to pick up the pencil and when he came back up he felt a cold breeze on the back of his neck. A large chunk of flack had passed right through the aircraft leaving two hole directly in line with where he was sitting, before he had bent over to pick up his life saving pencil. On another occasion as Don sat in his turret, he saw a giant black shadow pass right across in front of him - their aircraft rocked. A Lancaster had crossed their flight path and the belly radar pod had struck the flight engineers station on their Halifax. The flight engineer usually stood with his head in a perspex bubble protruding just above the fuselage. This night his flashlight had gone wonky and wouldn't always work. At the exact moment of impact he had just bent over to rap the flashlight on his leg, when he stood up he found the top of the fuselage had vanished. Just plain luck or divine intervention, you be the judge.

Don also noted that over a period of time a number of 415 squadron ground crew had gone A.O.L. and no one knew their whereabouts (or was going to admit it). This continued on until the Red Cross name lists had come back from German POW camps. The lists began to contain the names of the A.O.L. ground crew, now in German prisoner of war camps. Apparently it was common to take ground crew on "rides" during active missions and some were lost when the aircraft they were in went down. Don said they had taken their captains brother a couple of times as he was a ground crew member on 415. Apparently the C.O. put an immediate stop to the "rides" after the POW incidents.

Throughout his tour at East Moor Don lived in quarters at the airfield.  On occasion he visited the nearby pub located at the village of Sutton-on-the-Forest.  He also made his way to York and noted that the cab rides back to the airfield often proved more exciting than some of his flights.