While cruising along straight and level at 500' on autopilot, Argus 712 suddenly pitched-up into a nose-high attitude and began climbing toward a stalled-wing condition. The reflexive attempt at corrective action found the control column to be firmly fixed in the fore and aft plane … it was locked in place and wouldn’t move in either direction … elevator control was lost … aileron control seemed normal with free yoke rotation in both directions … autopilot was immediately switched OFF. Recalling a procedure for runaway trim on the previously flown P2V7 Neptune, Andy applied 45° of bank in a left turn to maintain a semblance of altitude control and Gene instinctively grabbed his large elevator trim wheel and began rotating it forward … with great success. While Andy maintained directional control by aileron and a pinch of rudder, Gene was able to control pitch attitude with elevator trim; while one flight engineer assisted by adjusting engine power settings, the other F/E disappeared into the hell-hole below and physically disconnected the autopilot control module from the aircraft’s flight control system … no change. So far so good, but without any previous record and without an established procedure relating to their condition, this crew’s common future was still flying toward a big unknown. Fearing they might also experience a similar loss of aileron control, Captain Andy issued the “dinghy-dinghy” directive to his crew while cautiously turning toward land … accompanied by a blind Mayday transmission on VHF and an SOS message to Maritime Command Operations on HF.

Getting themselves over terra firma as soon as possible was an obvious priority: even a smooth and successful ditching could inflict considerable pain and discomfort … fire-retardant flying suits were not designed for chilly-dipping in the big pond. If necessary, abandoning ship over land was the preferred option; and as such, that day’s coast-crossing inbound checklist included the donning of parachute harness … just in case. Their closest airport and foremost destination, CYZX Greenwood, soon proved undesirable because of strong-gusty crosswinds; similarly, their home base at CYSU Summerside was also advertising an ornery wind blowing between the runways. With its long runway and appropriate wind, CYCH Chatham quickly became the destination of choice for an envisioned flapless landing in a large airplane with significant flight control issues. Notably, the elevator trim wheel on the Argus aircraft did not directly control the elevator trim tab; instead, it merely adjusted a small control tab that encouraged its larger trim tab to aerodynamically influence their much larger free-floating control surface. While the trim change associated with lowering of the undercarriage was a necessary risk; those demanded by extension of trailing-edge wing flaps would be wholly undesirable. Meantime, old 712 was temporarily edged up to 12,000' in order to remain clear of cloud and associated turbulence while maintaining a visual horizon for attitude reference. Closer in, Chatham GCA (Ground Controlled Approach) provided radar assistance into the slot before leaving them to their own devices on their abnormally flat-and-fast approach profile: “Happy landings, Swordfish!” (3)

Motivated by circumstance and fuelled by adrenalin, four Pilots, two Flight Engineers, three Navigators and seven Radio Officers became quickly reacquainted with their emergency procedures checklists, paying particular attention to the one about ditching—landing on the water and transferring to inflatable rafts. While a lucky few had once flown in a floatplane, no one aboard this 150,000-pound behemoth had ever been forced to land on water in a wheel-driven airplane that had no floats … on any kind of water. Even the most inexperienced of crewmembers had already gained healthy respect for the sea, especially for their traditional territory—the North Atlantic Ocean wasn’t a pretty sight much of the time and it inspired less-than pretty thoughts on this day. Suffice to say, the worst case scenario comes across as a simple prelude to suicide … think 50-foot waves and 50-knot winds … whereby instant death on impact seems mercifully better than being flung from a fractured airframe into hell’s freezing abyss. Best case scenarios, however, are considered imminently more survivable … assuming a smooth into-wind touchdown on the backside of a broad swell and assuming acceptable levels of water intake during disembarkation and no subsequent raft irregularities … even when flat calm, that ocean can freeze the life out of a human being in very short order. Happily, today’s fairly moderate conditions offered them fairly good odds. Nevertheless, to ease their minds while lightening their load, the well-trained flight crew onboard Argus #20712 on the 4th day of November in the year 1966 strictly adhered to their ditching checklist by gathering up every loose item and sending it overboard. 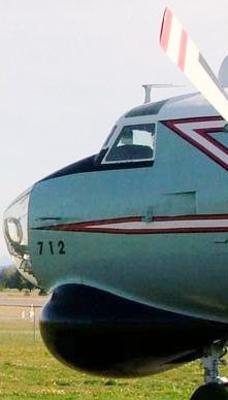 Seen as primarily expendable were the 120 high-tech sonobuoys, scores of heavy SUS charges (underwater explosives), and scores of no-longer-necessary smoke markers that were unceremoniously jettisoned. Had they been carried that day, all bombs and torpedoes would also have been released from the bomb bays … targets or no targets, economic factors had slipped from the bottom of the bucket list.

Oh, how quickly life can change in the world of aviation. Barely three hours earlier, Crew #5 of 415 (Maritime Patrol) Squadron departed their CYSU Summerside base on a “piece of cake” patrol over local waters. Seen as welcome relief from the usual 18-hour overnighter far from home in marginal weather, this was scheduled to be a 6-hour daylight mission in good weather … and instead of listening for a submerged needle in a liquid haystack they were simply tasked with re-marking an established datum point near Sable Island off Nova Scotia’s south shore before heading straight home. Too good to be true, it seems. 2

Soon after arriving on task, and in keeping with standard seat-change procedures, the crew’s captain, Andy Normand, slid into the left-hand pilot seat to begin his first two-hour stint at the controls while Gene Roy climbed into the right seat to assist with communications and procedures. The other two pilots (Gary Kirk and Ron Statia) were concurrently enjoying the crew-rest phase of the rotational duty cycle. Interestingly, Captain Andy Normand, now in the left seat, was a temp … filling in for Crew 5’s official captain (Greg Lister) who was on sick-call that day. Now in the right seat, Gene Roy was the newest and most junior Second Officer on that crew, but a seasoned pilot who brought considerable experience from elsewhere. Retrospect strongly suggests their seat assignments to have been fortuitous

These words over the aircraft intercom caused instant alarm and immediate action … as they were meant to do. No, this was not a practice drill. The captain’s voice was unmistakable and the urgency of his command was undeniable, though it came out of the blue and without warning. The several high-g flight manoeuvres occurring just before his call to action seemed nothing unusual to those operating in the back end of their CP-107 Argus sub-hunter … it was the norm … until now! Momentarily stunned by surprise, a plane-load of professionally trained aviators sprang into action, waking-up the bunk sleepers and tuning-in the disbelievers while coming to grips with the enormity of their situation. Okay then! How many dinghies do we have? Where are they? Who’s responsible for them? What else must we take? What else should we take?

It was indeed a happy landing. A smoothly flown approach with delicate handling by the cockpit crew led to a silky soft landing by Andy … directly into a light wind on CFB Chatham’s longest runway. Well done, Andy! Well done, Gene! And of course, sincere appreciation goes to the very adept flight-engineer throttle-jockeys whose names seldom made it into our log books. Other Argus pilots who were present to witness that arrival of Crew 5 in 712 were unanimous in our appreciation: for many of us, smooth landings in the Argus were rare events at the best of times, even with a fully functioning airplane. Although it was probably just one more greaser among his many, Andy would always remember this flapless, elevator-less landing on November 04, 1966. For his entire crew, it was a big breath of relief after a seemingly long and overly intense day. For aircraft operators and manufacturers, it was a game-winning save—calamity and catastrophe were held at bay. For most everyone in the aviation community, that landing was a beautiful exclamation mark—an appropriate ending to a brilliant display of airmanship.

All was not finished yet, however. Immediately after touchdown, Gene had the foresight to rotate the elevator trim wheel fully forward to thwart any uninvited nose-up tendencies during roll-out. Lo and behold! In the process, the erstwhile immovable control column was suddenly free, moving easily in both the fore and aft directions, feeling just like a normal control pole should. Gadzooks! What do we say now? Soon after engine shut-down, an airframe maintenance technician clambered into the cockpit to investigate … “yup, it moves just like it should.” After considerable time at the task and innumerable cycles of the control column, the techie finally felt it become jammed-solid and unmoveable in the fore and aft plane … “yup, it’s stuck just like they said it was.” Thus began a comprehensive and surprisingly brief investigation into cause of the problem—a poorly lubricated gear box, connecting elevator push rods in the tail assembly, was identified as the culprit. Soon after we had shuttled the happy survivors back home to Summerside, a replacement gear box arrived at Chatham to be installed in 712 which was back on active duty several days later. For many people, 04Nov66 was just another day at the office.

Subsequent logbook endorsements and letters from his squadron commander (W/C Pierpoint) and from his base commander (G/C Berry) commend F/L Normand “… for his excellent display of airmanship under hazardous conditions. His skill and decisiveness were instrumental in averting a major disaster and are indicative of the highest degree of professionalism.”

Fifty years after the fact, Andy remains ever grateful to his crewmates and to all the people on the ground who helped provide successful resolution to an extremely awkward situation. Simultaneously, he feels somewhat bemused by an apparent lack of follow-up action: denied direct access to pertinent maintenance information at the time, he had to accept the party line handed down the chain of command—one gear box on one airplane had missed being lubricated on one routine inspection. Otherwise, all was then considered to be well in the world of Argus. Today, there remains but scant reference to this 712 anomaly. When queried, the Canadian Forces Department of Flight Safety advised that DFS only recorded accidents in our database before 1967; the occurrence you mention below was classified as an incident therefore we have no record of a flight safety report. However, after looking through Flight Comment magazine archives around the subject time, we noted an article on the aircrew receiving a Good Show award for their efforts. (4)

Good Show indeed! Yes, the summer of ’67 edition of Flight Comment magazine does include a brief summary of the incident along with a photograph of Andy and Gene. In the interest of flight safety, a mini-report is better than no report. However, when reading this cursory salute to sound airmanship, it is difficult not to think about Argus #20727 that had disappeared with its entire crew the previous year while conducting torpedo trials off the coast of Puerto Rico—flying at night and at similar altitude. We’ll probably never know what happened there.

For, as Andy Normand calmly states: “If 712 had pitched down instead of up, we wouldn’t have this story to tell.”

1. Andy Normand joined Air Canada in 1967 where he served for a time as Chief Pilot DC-9 before retiring in 1998 and now living in Ottawa

2. Gene (Jean) Roy, now deceased, had retired from the air force to live in Bathurst NB.

3. Argus 712 remains on display at Comox Air Force Museum in Comox BC. 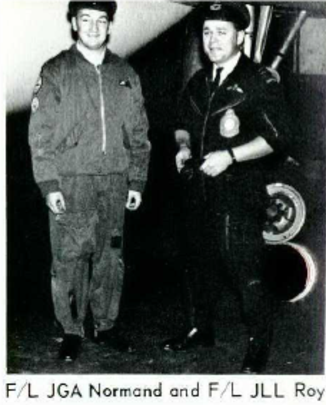