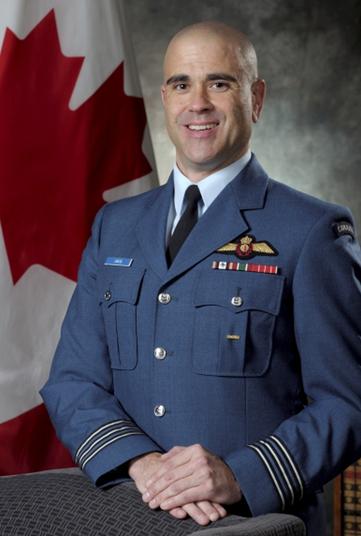 Lieutenant-Colonel Jeff Davis was born in Loretteville, Quebec. He joined the Canadian Armed Forces in 1990 under the Regular Officer Training Program after graduating High school in Oromocto, New Brunswick.
He graduated from the Collège militaire royal de Saint Jean in 1995, with a Bachelor’s degree in Business
Administration.

In 1996, LCol Davis completed his Navigator training at Canadian Forces Air Navigation School, in Winnipeg, Manitoba. Upon graduation he was posted to 405 Long Range Patrol Squadron in Greenwood. While in Greenwood he completed two operational tours at 405 Squadron, one as an Acoustician and one as a Tactical Navigator. In 2002, he flew operationally in South West Asia as part of Canada’s commitment to Operation Apollo. LCol Davis has also been posted to 404 Long Range Patrol and Training Squadron as a TACNAV instructor and to the Long Range Patrol Standards and Evaluation Team.

Promoted to Major in 2007, he was posted back to 404 Squadron as the Deputy Commanding Officer and subsequently deployed to Afghanistan, as the Commanding Officer of Canada’s UAV detachment. Upon his return from Kandahar, he attended the Joint Command and Staff Program at Canadian Forces College in Toronto. Following the completion of the course in 2011, he was posted to the Aerospace Component
Coordination Element Atlantic in Halifax where he worked as the Current Operations Officer. In 2013, LCol Davis was posted to Canadian Joint Operations Command (CJOC) in Ottawa as Executive Assistant to the Deputy Commander Expeditionary Operations.

Promoted to his current rank in 2014, LCol Davis served as J3 Africa at the Canadian Joint Operations Centre.  On 5 June 2015 he was assigned Commanding Officer and led the reformation of 415 Squadron after being stood down for ten years.  In June 2017, LCol Davis deployed on Operation IMPACT, where he currently serves as the Deputy Commander/Chief of Staff of the Air Task Force Iraq.