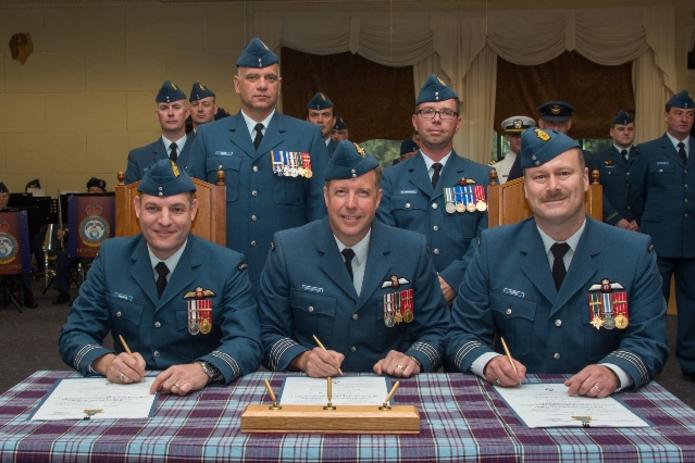 A long association with 415 Squadron has come to an end for Major Serge Parisien. July 19, he turned command of 415 (Long Range Patrol Force Development) Squadron over to Lieutenant Colonel Bernie Thorne in a ceremony at 14 Wing Greenwood. Starting out as a young captain in the squadron early in his career, Parisien carried the colours when the squadron was disbanded in 2005, carried them again in 2015, as the re-focussed squadron stood back up and, for a ﬁnal time on this day. “Up until he passed them to Colonel Thauberger, I didn’t know if he was going to let ‘em go!” said Thorne. Colonel Pat Thauberger, commander of 14 Wing Greenwood and the reviewing ofﬁcer at the ceremony, commended Parisien as perhaps “the biggest champion of 415 Squadron. “When we needed a new commander, you were the choice.” Parisien had a short command, taking the role June 1 as the former commanding officer was deployed and posted. “Officially, formally and legally, we needed someone in command – even for a short time,” Thauberger said, describing the work of 415 Squadron as integral to the continuing success development of the long range patrol ﬂeet: any gap in leadership would slow that work. “There is work to do, more hurdles to overcome. We look forward to the development of Aurora capabilities for the ﬂeet. It’s world leading, and something we should be proud of within the Royal Canadian Air Force and Canada. You are directly contributing to operations.” Parisien gave all the credit to his success with 415 Squadron to fellow members. “It’s a small squadron with a big job, a combined team of Regular and Reserve force and civilian members who make it happen. I’ve done nothing here - accomplished nothing; without all of you. Thank you very much for allowing me to take this squadron, even just two months. I’m very proud, and it’s not something I’d been expecting.” Parisien now moves to the Canadian Aerospace Warfare Centre, posted in Greenwood. Thorne was last in Greenwood in 2015, and was also in the same parade as Parisien as 415 Squadron stood back up: Thorne was the last commanding ofﬁcer of the Maritime Proving and Evaluation Unit which, with 14 Software Engineering Squadron, combined to repopulate 415 Squadron’s testing and development mandate. “There are interesting and challenging things going on right now – and there is no better place to be,” Thorne said. “415 is at the forefront of integrated sensor suites for overland, over disaster scenes and with a renewed focus over water – back to our roots. We are going to see things we have been waiting decades for, and 415’s projects teams are right to be proud of what they do.” 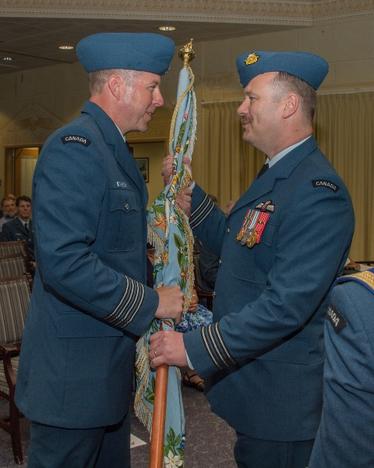