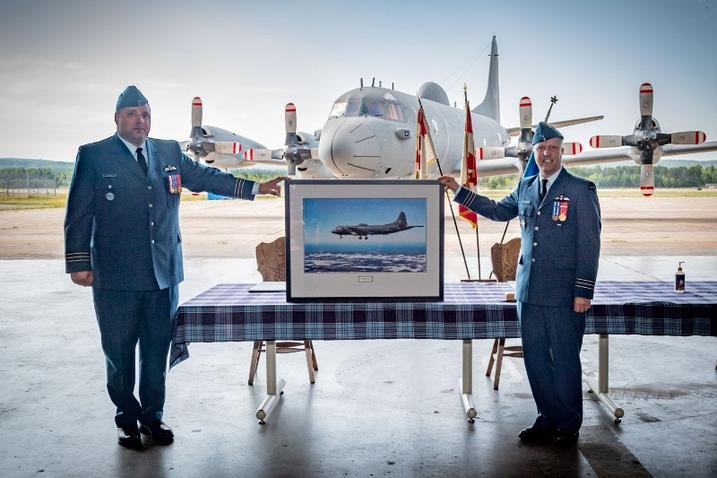 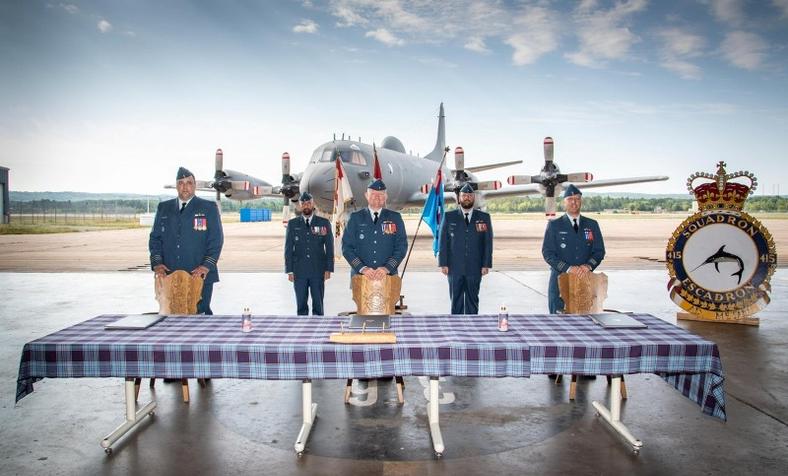 “I’d be honoured if you would display this,” he said, offering LeBlanc a look at a photo of 108 in the sky over 14 Wing Greenwood as it flew for the first time in its reconfiguration February 21, 2020.

“This photo, this aircraft, symbolizes the Block IV to all of us. It was a full squadron deal to get this first flight in. This photo will refresh the heritage we have in our squadron, and remind us of our good work.”

Freeman leaves the squadron – and the Royal Canadian Air Force, taking a civilian position as engineering test pilot with the Aerospace Engineering Test Establishment in Ottawa. The role means he won’t be a stranger to 415 Squadron, or 14 Wing, as the Block IV work continues.

LeBlanc is excited to join 415 Squadron, himself coming from Ottawa where he worked most recently as the executive assistant to the director general military careers.

The 415 (Long Range Patrol Force Development) Squadron change of command ceremony, held on 14 August 2020, was about as small as you could plan in these times of COVID-19 public health precautions. The intimacy of the event, though, added something very special.

On a first-name basis, 14 Wing Commander Colonel Brendan Cook thanked the outgoing commanding Officer, Lieutenant-Colonel Ross Freeman, and welcomed the incoming Lieutenant-Colonel Patrick LeBlanc. The podium went almost unused, as each moved to the front of the row of seven chairs set in a line across the hangar floor. Beyond the squadron flags, as the hangar’s doors were pulled open to the airfield, sat the Squadron’s pride: the first of the new Block IV CP140 Aurora aircraft.

“These are changing times,” said Cook, “but change drives 415. It is embedded in what you do.

“Ross, the squadron was in good hands when you arrived, with a lot of work to operationalize the Block III and the Block IV steaming ahead – and a whole host of other projects you know full well, making the task daunting. 108 here in front of us, 111 coming and another aircraft in Halifax – that’s a massive amount of work done by 415, and the vast majority of that work happened while the rest of the world went home. You’ve charted a course for 415, set them up to achieve these milestones and helped navigate them ‘to the mark.  As 415 does.”

Cook welcomed LeBlanc as the “exact kind of person” to do the work ahead.

“Pat, you know the important thing now is to breathe, get a feel for the aircraft, and then guide it. It’s not about putting it in high gear to see what it can do. And, that’s not something you can do with a squadron. Take command, meet your squadron, build a plan to take the squadron to that mark: this is what 415 is known for.”

Freeman said he’d already said his goodbyes to the larger number of Squadron members, and shared the gift he’d presented them with LeBlanc.