THE ORIGIN OF THE CHAMPAGNE CREW

After circling the downed helicopter and establishing contact with the pilot on VHF, it was established that a safe landing had taken place and there were two souls on board.  As it would take some time for help to arrive, the crew decided to drop a “care” package.   Several choice delicacies were selected from the crew onboard rations. These were jammed (no pun intended) into a sonobouy container and air dropped to the two hungry and stranded victims. Later in the day, when the weather improved, a civilian operator airlifted fuel to the helicopter crew and the two pilots came out to tell their story to their employer, the President of Aquitane Oil Company of Canada Ltd.

After further adventures in Yellowknife (which have given rise to the claim that Crew Six is a crew that needs no props) Captain Melson and crew arrived back at Summerside to find a message awaiting them from the President of Aquitane. The message stated that the President was very thankful for the services and support and invited the entire crew to come to Calgary and enjoy the hospitality of one of Canada’s largest oil companies. In keeping with protocol, a letter was dispatched thanking the President for the invitation and indicating the sincere desire to take him up on his offer, if ever the opportunity to stop off in Calgary arose.

Several weeks later a case of a dozen bottles of Mumm’s champagne with a complimentary note turned up in the CO’s office.  To the pleasant surprise of the crew, on Monday 13 September LCol Sinnett presented Captain Melson with case of champagne.  At the next crew party, with the CO VP 415 invited as a guest, corks were popped to commemorate the official birth of the Champagne Crew! 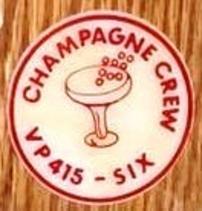