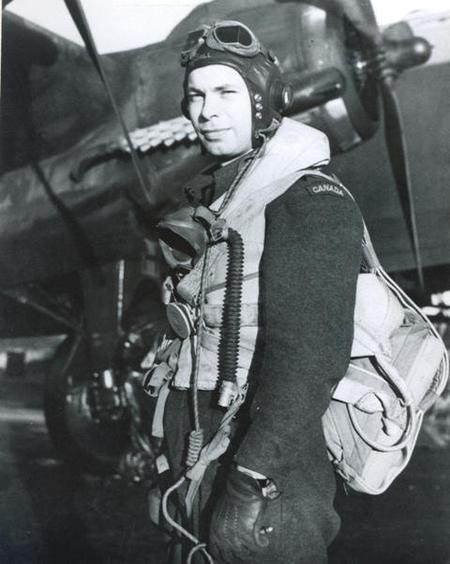 Frank Westoby Ball was born in Brandon, Manitoba on 17 September 1916.  He later lived in Belleville, Ontario, and studied at McMaster University.  Frank enlisted in Toronto on 4 July 1938 and received his wings at RCAF Station Trenton on 17 June 1939.  Early in the war, he was employed at various flying schools and in January 1943 he was made Deputy Director of Air Training at AFHQ.  In February 1944 he was posted overseas.

Squadron Leader Ball was first assigned to 427 Squadron and on promotion to Wing Commander took command of 415 Squadron on 31 October 1944.  He was the last wartime Commanding Officer of 415 Squadron.  He was awarded the DFC on 8 September 1945.

He was promoted to Air Commodore and assigned Chief of Operational Requirements at AFHQ 1961.  He served as Commandant of the Air Force College from 1963 to 1965.  He then became Deputy Chief Plans at CFHQ.  Later in 1965 he was promoted to Air Vice-Marshall (AVM) and took on the duties of Assistant Chief of Defence Staff.  In 1966 he was assigned Chief Operations.  In 1968 he became the Chief of Staff at 4th Allied Tactical Air Force.   Following his retirement form the RCAF in May 1969, AVM Ball worked with the RCAF Association and the Bellville General Hospital before taking full retirement.  AVM Ball passed away on 16 April 1999, in his 83rd year.