Following his time on 415 Squadron, Bob Arrand attended a general reconnaissance course spending six months in Cumbria.  In March of 1945, he was sent to Nassau for training on Liberators and then he joined 203 Squadron in Ceylon (now known as Sri Lanka).  After the surrender of Japan, the Squadron was employed in a logistical role, flying food and medical supplies throughout the Indian Ocean theatre.  He returned home and was released from the RAF in late January 1946.   He re-joined the Martins Bank (subsequently Barclays) and rose to branch manager level.   In 1951 he married Patricia and they later had two children.  He and Patricia now reside in Sutton Coldfield, West Midlands.  They recently celebrated their 61st wedding anniversary.

Even though Bill Pilkington returned to Canada in 1944, the relationship between Bob and himself remained close.  They maintained regular contact and Bill kept Bob apprised of Squadron Reunions and mutual friends who had flown on 415.  For example, in 1961, Bill sent Bob a photograph of the 415 Squadron 20th Anniversary Reunion (see Figure 4 in which Bill Pilkington is seated 3rd from the left and Mac MacEachern is standing in the back row, 7th from the left).   On the back of a dinner menu, Bill recorded a list of the participants whom he thought Bob would remember and sent the menu to Bob as a souvenir.   Their friendship was so close that Bill even became the godfather of Bob’s only son.  Bill became a Sergeant in the Toronto Police Force and made one visit back to England.  Unfortunately Bob was never able to make a voyage to Canada.  These two crew mates continued to correspond until Bill passed away.

Information for this article was gathered by Patsy Moody, Bob Arrand’s only daughter.  Through email collaboration, between Patsy and Chris Henneberry, a story was developed and photos shared. Additional information was gathered from the official 415 Squadron history book titled “Swordfish – The Story of 415 Squadron”.

Bob passed away peacefully at his home in Sutton Coldfield, West Midlands in the UK on the 17th of April 2013. He was just one month away from his 91st birthday. 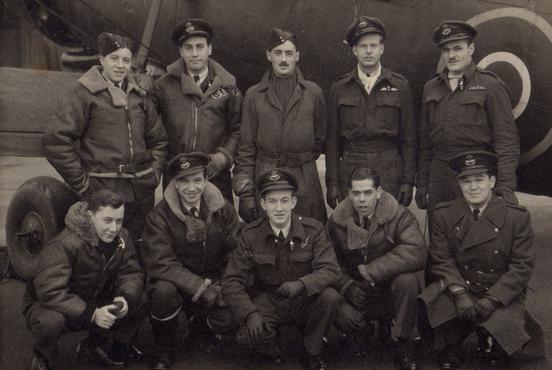 on the Flight Line at Thorney Island Sept 43

Bob and Bill, along with five other 2-manned crews, moved to Manston, Kent, where they flew Albacores on anti-E/Boat (fast torpedo boat) suppression missions.  As for Mac and Ray, they went off to fly Wellingtons at RAF Bircham Newton.  By November 1943, 415 Squadron was the only Allied unit still flying Albacores – it had proven to be very vulnerable in combat and never managed to fully fulfill its anti-shipping role.  Despite the Albacore’s operational limitations, Swordfish crews conducted many successful attacks off the coasts of France and Belgium in the run up to “D” day.  On April 9th 1944, Bob and Bill flew their last operational mission.  Of note the Albacore was the RCAF’s last operational biplane and the only one ever to be used in combat. 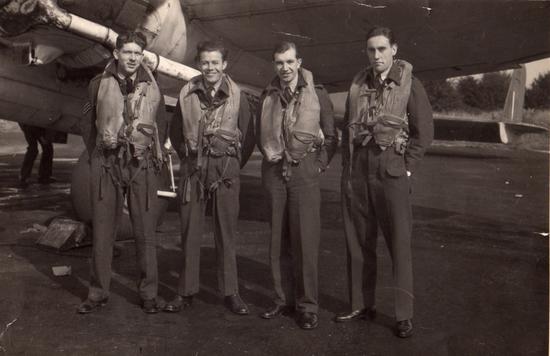 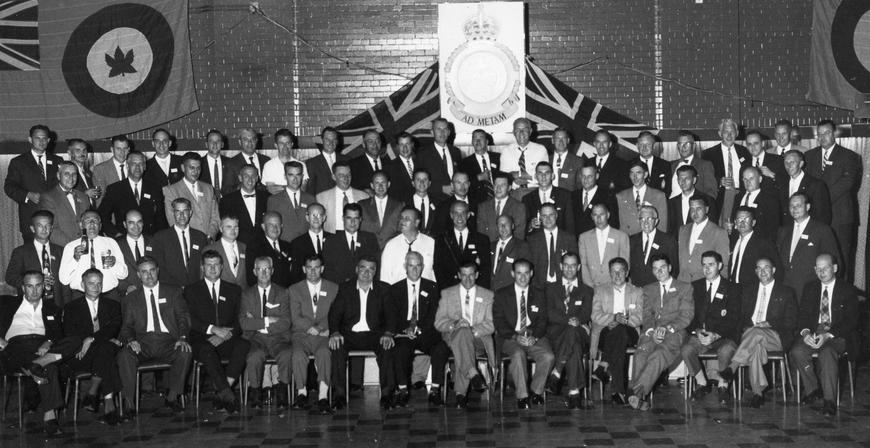 We thank Bob for his service as a Swordfish and for sharing part of his war time experience with The 415 Squadron Association.

Bob Arrand was born in Tuxford, Nottinghamshire England in 1922.  At 18 years of age, he volunteered to join the RAF and within a year received notice to report for duty in May 1941.  His enrolment was conducted at Stratford-upon-Avon, and interestingly his medical was actually completed on the stage in the Shakespeare Theatre.  He lined up on one side, went on stage for the examination and then filed off on the other side.  Shortly thereafter, he went to St. Andrews, Scotland for his initial training, which lasted a scant 6 weeks.  He was then put on a boat for South Africa for navigation training at Oudtshoorn in Cape Province, which he successfully completed in March 1942.  Bob then travelled to Turnberry in Ayrshire, Scotland for torpedo related training.  It was here that he was paired up with pilot, Canadian Bill Pilkington.  Together they trained on Hampdens, Ansons and Oxfords until January 1943 when they joined 415 Squadron at Thorney Island from which he flew 37 operational missions with 415.  At the end of the World War II, Bob held the rank of Flight Lieutenant. 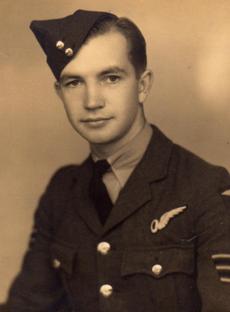 Right from the start of his operational training Bob considered himself extremely lucky to have been crewed with Bill Pilkington, with whom he would share a life long friendship.  On arrival at Turnberry, he and a fellow navigator and friend, Tommy Hodgson, were standing together with other navigators when a group of pilots were introduced to them.  A couple of Canadian pilots came over to Bob and Tommy – they were Bill and his friend Joe Reigate.  Bob says he immediately took to Bill and he put out his hand to shake his and said “you and me then?”  It followed that Tommy and Joe paired up as navigator and pilot.  It was a decision that neither Bob nor Bill lived to regret.  Sadly Tommy and Joe never returned from their first mission to Norway.  The 415 Squadron Roll of Honour marks the loss of Reigate’s Crew on 11 March 1943, whilst conducting a reconnaissance in Norwegian Fjords in search of the Tirpitz.

Bill Pilkington’s Hampden crew consisted of Bob as Navigator, Willard “Mac” MacEachearn and Ray Parliament, both of whom were wireless operators/air-gunners.  Whilst operating from Thorney Island on moonlit nights, missions were conducted with torpedoes searching for German ships off the Dutch coast.  When there was no moon, crews were sent to St. Eval in Cornwall to load up with 6 depth charges and patrol the Bay of Biscay looking for German U-boats to attack.  Early on, they flew to Tain, Scotland from which was conducted an operational mission in search of the Tirpitz, which was said to be somewhere along the Norwegian Coast.  Bob noted that “we didn’t find her; otherwise I might not be here today”.  In May 1943, on another memorable mission, the Squadron launched eight aircraft to attack German ships off the Dutch and German coasts near the island of Borkum.  Two convoys were sighted and in the melee that followed two naval vessels were sunk.  Three aircraft were damaged and two crews failed to return.  On this mission Bill Pilkington’s crew claimed one German merchant sunk and as a result of anti-air fire, Mac was slightly injured by shrapnel.  In total, the crew flew 19 missions together between March and September 1943, at which point the Squadron converted to Wellingtons and Albacores. 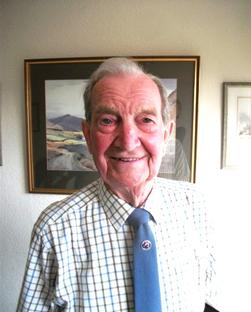