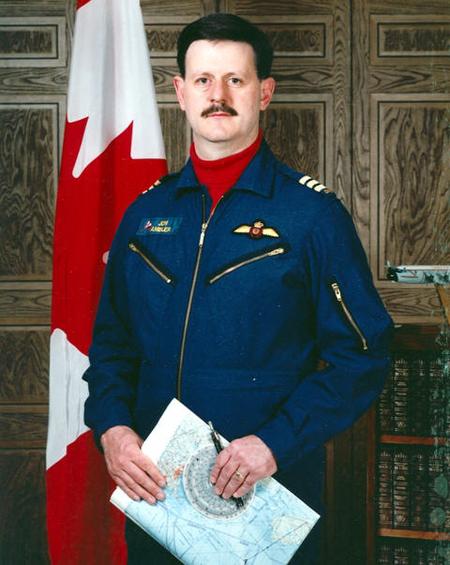 Jon Ambler was born in Rotherham, England in 1955 and he and his family immigrated to Canada in 1964. They initially lived for two years in Corner Brook, Newfoundland, and then in 1966 they moved to Kenora, Ontario.

He is a graduate of Beaver Brae Secondary School in Kenora, Ontario and the Red River Community College, Winnipeg, Manitoba. In 1997 he completed a BA in History and Political Science from the University of Manitoba. He was active in Sea Cadets from 1968 to 1973, and attended summer camps at Quadra and Esquimalt, qualifying as a Boatswain, and taking cruises on HMCS Provider and HMCS Columbia.

He joined the CF in 1979, was commissioned as a Second Lieutenant, and earned his Navigator wings in 1980. His first operational tour was with 415 Squadron (Summerside, then Greenwood) until 1984.  A tour as an instructor followed at 404 Squadron. In 1986 he became the Navigator Career Manager at NDHQ.  In 1988, then Major Ambler was posted to the CDLS London, England to serve as Staff Officer Operations and Plans. Following his graduation from the RAF Staff College in 1990 he re-joined 415 Squadron, serving as Flight Commander and Deputy Commanding Officer.

Promoted to L/Col in 1993 he was posted to NDHQ where he served as the Executive Assistant to the Associate ADM (Personnel).  In 1995 he commenced his third tour at 415 (MP) Squadron, serving as the Commanding Officer until 1997, and completing over 3,000 operational flying hours. Following his graduation from the USAF Air War College in 1998 he was promoted to Colonel and was posted to the HQ of the NATO AEW&C Force in Mons, Belgium, where he was the Assistant Chief of Staff for Standards, Policy and Plans. Returning to Canada in August 2001 he served two years as the Director of Cadets at NDHQ. In July 2003 he took command of Task Force El Gorah, Canada's contribution to the Multinational Force and Observers (MFO) located in Egypt's Sinai Desert.

Since his retirement, Col Ambler remains involved in his community as a private contractor for the Comox Valley Air Force Museum Association and as a councillor for the City of Courtney.  He and Jill, his wife of 35 years, reside in the Comox Valley.