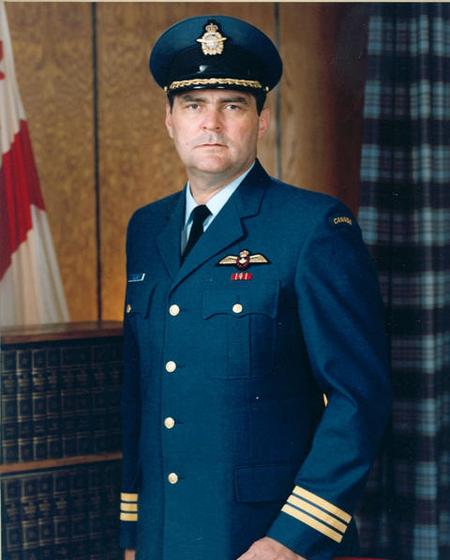 Born in Ottawa, Pierre Allard, joined the Royal Canadian Navy under the VENTURE Officer Training Plan in 1964, and received his pilot wings at Portage la Prairie, MB.  Later, at VS 880 (Shearwater, NS), he flew Trackers and then joined HMCS Bonaventure.

In 1969 HMCS Bonaventure was decommissioned and Pierre became Cadet Liaison Officer for the Quebec region (at Montreal). He then attended Canadian Forces Staff School and was transferred to 415 Squadron (Summerside), where he flew the Argus aircraft.

Capt Allard returned to Portage la Prairie, in 1976 as a Flight Commander with 3 Primary Flying School. He was subsequently posted to National Defence Headquarters in June 1980 and promoted to the rank of Major six months later.

After completing his B.A. in Political Sciences and History (1982, University of Manitoba), he attended the Belgian “Institut Royal Supérieur de défense” in Brussels. In 1984, he joined 405 Squadron (Greenwood) as a Flight Commander.

In July 1993, he was posted to National Defence Headquarters in the Directorate of Aerospace Requirements Maritime and Rotary. In June 1994, he was promoted to the rank of Colonel and assigned to the Policy and Communications Group as Senior Policy Planner.

After retiring, Colonel Allard joined the Royal Canadian Legion as a Service Officer. He was appointed Director of the Dominion Command Service Bureau in 2003, until his retirement on 6 January 2012. At that time, he continued studies at l’Université du Québec and the Royal Military College. He also served a two-year term on the Veterans’ Ombudsman Advisory Council. He is married to the former Jacqueline Richard of Digby, NS. and have two children,  Jean Paul and Mark.  They now reside in Ottawa.