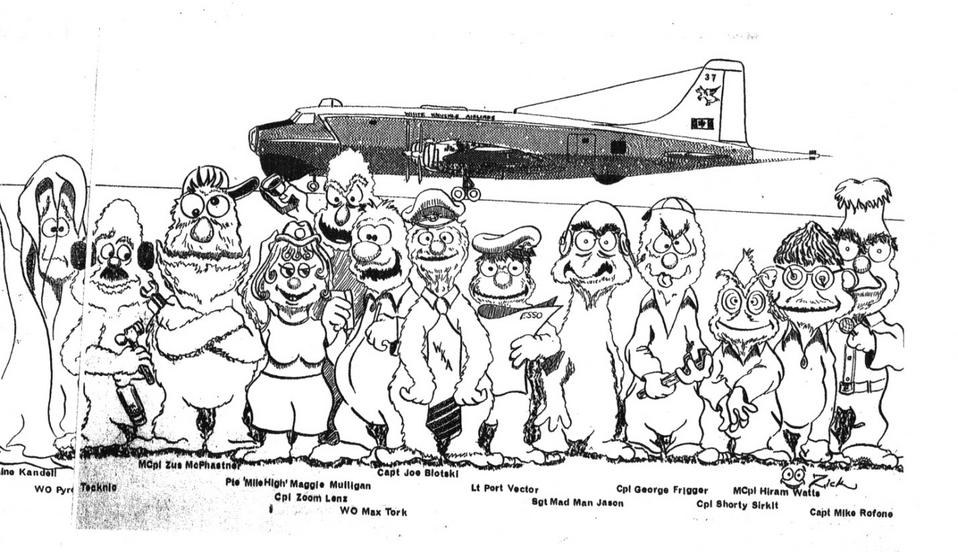 THE ORIGIN OF WHITE KNUCKLE AIRLINES

John Scott (Cyclops 01) writes that when he was on 415 Squadron, back in 1972-76, one of his primary secondary duties was Editor of the Summerside “Gulf Wings” Base newspaper. John happened to see the pullout calendar enclosed in the 1973 December edition of Canadian Aviation Magazine (CanAv).  The calendar depicted the infamous Down East International (DEI) Crew, created Capt Jack Desmarais (aka Ace McCool) of Air Canada, with characters such as Cowboy McClusky, Crazy Iris, Churchy LaFemme, Mile High Millie, etc… in a cartoon format.

John, thought that it would be a great idea to print a full page calendar in the January edition of Gulf Wings ‘copying’ the DEI concept but instead of the DEI Vanguard aircraft, the flush riveted, oil spewing CP-107 became the centerpiece. Of course, a crew was needed!  As it happened, one of the observers on the Squadron, Dale Lounsbury, was a very good cartoonist.  John asked Dale, whose nickname was Zick, to produce a “Muppet” figured group that could be used as a masthead for the Gulf Wings 1974 Calendar.  John, who is a self-declared punster, and Zick began to develop names for the flight and ground crew who would populate the Muppet Crew.  Apparently they had a lot of fun and very little difficulty developing the names for their characters.

The characters were the pride of White Knuckle Airways.  Their airline livery and logo was affectionaly known as “Porcus Volente”.  The Flying Pig seemed to resemble something from 415 Squadron!  They also considered calling their aircraft the “Oil Slinger”.

The resulting cartoon was indeed used as the masthead for the 1974 Gulf Wings Calendar.  Apparently a copy of the cartoon was sent to Canadian Aviation magazine and passed to Jack Desmarais who posted the page in the Air Canada Operations Centre!  Shortly thereafter, John received a ‘letter’ from the law firm of “Lye, Cheet and Steel” suing him for $1 Million. John counter sued for $2 Million! Jack and John have been great friends ever since.

Clearly there was time in the 70s to fulfill secondary duties whilst exhibiting both imagination and fun as one sat the many days of ‘standby’. Base Commander Colonel Bill Hedges certainly enjoyed the ongoing saga and apparently was relieved not having to pay out the million dollars.