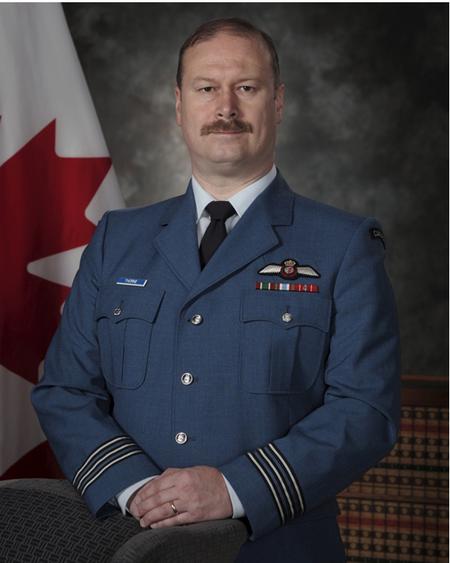 Lieutenant-Colonel (LCol) Thorne hails from Norman's Cove, Newfoundland.  He enrolled in the College Militaire Royale de St Jean in summer 1987 and graduated with a Bachelor of Science in 1992. In May 1993 he was awarded his Air Navigator wings.

Posted to 405 Squadron, Greenwood, LCol Thorne completed his Long Range Operational training on the CP140 Aurora in May 1994. He initially qualified as an Acoustician and Navigator-Communicator and subsequently upgraded to Tactical Navigator and Maritime Patrol Navigator. LCol Thorne deployed to the Adriatic for Operation Sharp Guard. He represented 405 Squadron at two O'Brien Competitions and represented Canada at one Fincastle Competition for which 405 Sqn received a CDS Unit Commendation for taking a sweep of all three awards. He departed 405 Squadron with almost 2400 hours of flying experience.

In 1999, LCol Thorne was posted to 404 Squadron where he initially taught new Tactical Navigators before being moved to the the Advanced Training Section. He was transferred to the Maritime Proving and Evaluation Unit (MP&EU) in 2004, where he was Project Director for a number projects including the Block III phase of the Aurora Incremental Modernization Project.

On promotion to Major in 2008, he was deployed to Afghanistan where he served as the Deputy J35 on the Commander Kandahar (COMKAF) Air Field Headquarter.  After a six month deployment, he was posted to Ottawa as the Section Head for the Air Force Experimentation Centre. In 2011, LCol Thorne became Air Combat Systems Operator Career Manager and in 2012 was selected to attend the Joint Command and Staff Program in Toronto.

He assumed command of MP&EU in 2013 and was the last Commanding Officer of that unit before it was stood down, which enabling the stand up of 415 Squadron. This tour saw the initial operating capability for Block III and the rapid deployment of the Aurora with the Interim Beyond Line of Sight high speed satellite communications to Operation IMPACT. Promoted to Lieutenant-Colonel, he returned to Ottawa where he served as has Senior Career Manager for the RCAF.  On 19 July 2017, LCol Thorne assumed command of 415 Squadron.

LCol Thorne has accumulated almost 4500 flying hours on the CP140 Aurora.  He holds an Master of Science degree in Training from the University of Leicester and a Master’s degree in Public Administration from the Royal Military College of Canada.