On the 7th of December 2000, Stan Wilson took part in the Canadian War Museum Oral History Project.  He was one of fifty World War Two veterans who were interviewed in 2000.  The interview recounts what prompted him to join the RCAF, how he became a navigator, how his crew was formed and their assignment to 415 Squadron.

Arriving in England during the summer of 1944, Stan became the navigator on the Minkler Halifax Crew.  During his interview he discussed the many challenges that his crew faced whist conducting 28 operational missions, which were flown between mid-January and mid-April 1945.  In August 1945, he returned to Ottawa eventually building a home, in which he resided until 2010.  He maintained contact with a number of his wartime crew members, often meeting them throughout the years.

Stan died peacefully in hospital surrounded by his family on 30 June 2016, at the age of 91.  He is remembered as a homebody who supported his children's and grandchildren's endeavours and adventures wherever they wanted to explore.  He loved sports, music, books, chatting with family, and spending time with both old and new friends. 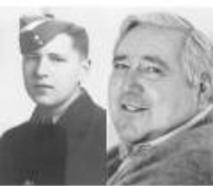