SWORDFISH VETERANS OF THE COLD WORLD

Ruff Johnson came into this world on 5 February 1926, a vintage year he would claim, in the storied little mining town of Springhill, Nova Scotia. His claim to fame during his Springhill days was to have his appendix removed by a Dr. Murray; Anne Murray’s father. Springhill was an unlikely place to launch an Air Force career one might think, but a series of events did lead to just that – primarily in Maritime Aviation, with tours in the four long range patrol operational Squadrons (including the honour of commanding one), challenging service on the air staff of Maritime Command and finally a period in National Defence Headquarters during the Aurora selection and implementation phases, and the initial steps towards Sea King replacement.

During High School and early College introduction to military service through the Militia was fun, but the real yearning was for the Air Force and flying.  He joined the RCAF in May 1944 (shortly after turning eighteen years of age), arriving at the Manning Depot in Toronto on 6 June 1944 with a host of others, just in time for the excitement of D-Day operations unfolding.  How eager they all were to join the fray. 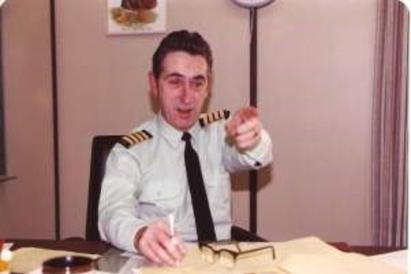 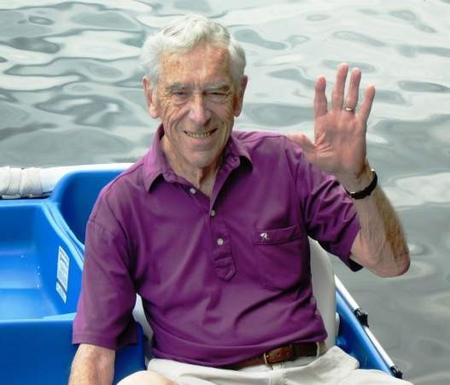 Next came the Air Armament Course in Trenton, followed by some filler time before starting 2 (M) OTU at Greenwood on Lancasters. Those were heady days, getting ready for the operational world – first on 405 Squadron and later on 404 Squadron after a second trip through the OTU, this time as Crew Captain.  During this period there was a variety of operational sorties as well as a number of training exercises with Naval forces out of bases around the periphery of the Atlantic, including Keflavik (Iceland), Kinloss (Scotland), St. Eval (England), Gibraltar, Lajes (Azores), Puerto Rico and Bermuda.  Much was learned.
​

It was time to get serious about a profession in life, so he registered at St. Francis Xavier University, to be followed by two-years at the Nova Scotia Technical College where he graduated with a Mechanical Engineering degree in 1949.  During his University years he spent the summer of 1946 at sea with the Reserve Navy (University Naval Training Division). 1947 brought the opportunity for a career in flying, when he was selected to participate in the first post-war RCAF pilot training course, which was set to run over three successive summers between university years, culminating with a “Wings Parade” at Centralia, Ontario in August 1949.  His recollection of one night flying sortie was lining up his aircraft between the two rows of lights, as he had been instructed to do, and being particularly surprised when he touched-down and discovered he had actually landed on the grass between the runway and the taxi way.  Applying power he took off again and believed that nobody  was the wiser for his minor error. ​

Following 415 Squadron was a posting to Maritime Command HQ as SSO Operational Readiness (Air) for the Argus, Sea King and Tracker fleets.  A most noteworthy achievement was his introduction of the Maritime Air standardization Team (MAST): a formal standards and training program for all Maritime aircrew – an achievement for which he was inducted as an Officer in the Order of Military Merit.  His final career posting was to National Defence Headquarters in the Directorate of Maritime Aviation (DMA), spending one year as a Section-Head followed by slightly more than 5 years as the Director.  It was during this time that the Aurora was selected as the Argus replacement and was put into service as the tail end of his time at DMA. It was also during his time at DMA that formal approval was provided, in 1979, to begin Sea King replacement studies.

With several mouths still at home requiring to be fed he continued on in uniform as a Reservist; first as one of a group of three retired Colonel-pilots (RCAF, RCN and Army) reviewing operational training requirements for CF aircrew and then another year as the head of the Squadron Maintenance Study; a report that helped shape the framework for aircraft maintenance operations that is, for the most part, still in play today. Two further employment stints followed; one with IMP as the Head of Logistics located in Ottawa and a further few years with Amtek (Ottawa), again in the field of Logistics Support.

Shortly after turning 60, with all six of his children out on their own, he retired completely and devoted himself to golf, bridge and charity work 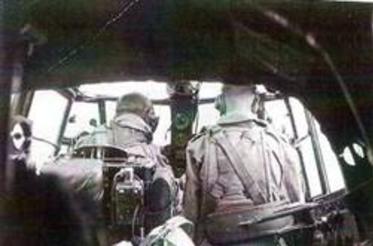 While it was enjoyable and educational to be in England during those final few moths of the war, it soon became clear that the pattern of RCAF service was going to repeat itself with the Fleet Air Arm, although his group did get as far as pilot grading school on Tiger Moths just before V-E Day.  Soon after his group were sent back home arriving in Halifax on 9 August 1945, just after V-J Day.​​ 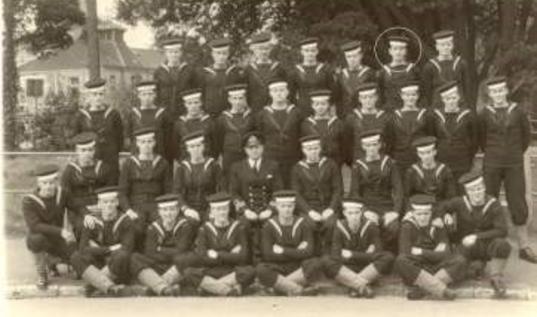 by the next day.  Missions were more surveillance in nature, often ending with stops at large USN air stations; NAS Alameda (San Francisco), NAS Los Alimitos  (Los Angeles) and NAS North Island (San Diego) – there is a memorable picture of F/L Johnson and his whole crew wearing sombreros while traveling around Tijuana, Mexico in the back of a donkey-drawn wagon.  There was one tragic turn of events when a Lancaster he was piloting lost control authority during a landing.  The aircraft pitched up and stalled, crashing into a nearby swampy area.  He and his co-pilot were thrown clear of the aircraft upon impact (the use of restraining harnesses was optional in those days).  Unfortunately the rest of his crew and a number of passengers perished.

If there was one particularly notable highlight during his time in Comox, it was his participation in a Joint Maritime Exercise (JMC) flying out of RNS Sea Eagle in Londonderry, Northern Island.  It was during the first of the three weeks of the exercise that he met a Royal Navy WREN – Petty Officer Patricia Lewis.  By the end of his third week, after a boisterous on board a RN Submarine (HMS Artemus), he proposed and they were married several months later on 1 July 1954 in Springhill, Nova Scotia.  The honeymoon was spent driving back to Comox (quite an adventure in those days) where son Roderick was born on 18 April 1955.  F/L Johnson heard the news that he had a new son upon landing after a training trip. His Flight Commander, a crusty WWII veteran, congratulated him and then told him that an aircraft needed to be delivered to Vancouver and since he was already dressed for flying he should make the trip. Saner heads prevailed and he was granted time to visit with his wife and new son.

In June 1955 it came time for him to leave operational flying for a while and start on a series of ground tours: RCAF Station Torbay/Adjutant (son Christopher), RCAF Station London/Officers’ School instructor (daughter Penelope), RCAF Centralia (son Geoffrey), RCAF Station Toronto/Staff School Instructor, RAF Staff College (Bracknell, UK)/student, followed by a posting to RCAF HQ in Ottawa (daughters Catherine and Susan) in the Directorate of Air Plans.  Although away from operational flying he was able to maintain his skills during these years by flying both the Expeditor and T-33.

At last, in 1966 he returned to operational flying with a posting once again to 2 (M) OTU in Summerside flying Neptunes (a fun aircraft to fly, especially when the two jet engines were engaged), preparatory to a second tour on 405 Squadron in Greenwood.  By now the Argus had replaced the Lancaster and the ASW role was very different.  The nuclear submarine was the quarry and passive acoustics constituted the main search sensor.  After an abbreviated tour on 405 Squadron he was promoted and posted to Summerside as the CO of VP 415 Squadron, where the Swordfish symbol was proudly displayed on every aircraft.  It was during his second year in command that he led a crew to Australia and brought home the Fincastle trophy.

There followed a few months of “Boot Camp” type training, before the word filtered down that the war was going well enough for aircrew training to start grinding to a halt.  Sure enough, by November 1944, the word was official and all aircrew trainees waiting to get into flying training were given the “pink slip”.

At about this time the rumour mill had the Royal Navy Fleet Air Arm still recruiting aircrew so AC2 Johnson and 45 other aspiring pilots immediately headed for Dartmouth, Nova Scotia to enlist.  By mid-December 1944 the group – now in sailor suits – boarded a troop ship and arrived in Liverpool on Christmas Eve.  Exciting times lay ahead of them they thought.
​

​October 1952 saw a change in scenery for F/L Johnson in a posting to the newly formed 407 Squadron at Comox, British Columbia – a very different environment with the mountainous topography and vast expanses of ocean. Postings were not as centrally controlled as they are today.  F/L Johnson had been sitting in the Mess when one of his Squadron mates came in complaining the CO had just informed him that he was to be posted to Comox.  Apparently the news was not sitting well with this fellow’s wife, an Annapolis Valley girl.  F/L Johnson remarked that he thought a posting to Comox would be a nice change and left the conversation at that.  He was
surprised to be called into his CO’s office the next day where he confirmed that he had indeed expressed a wish to go to Comox and was informed that he was to be on the train heading West 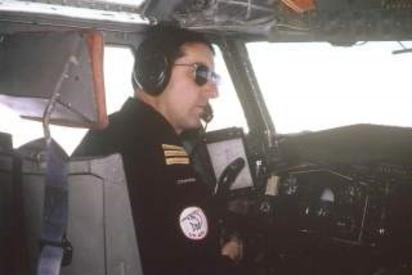 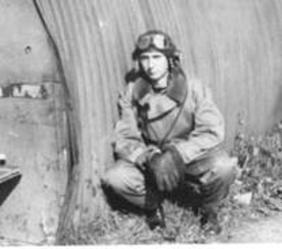