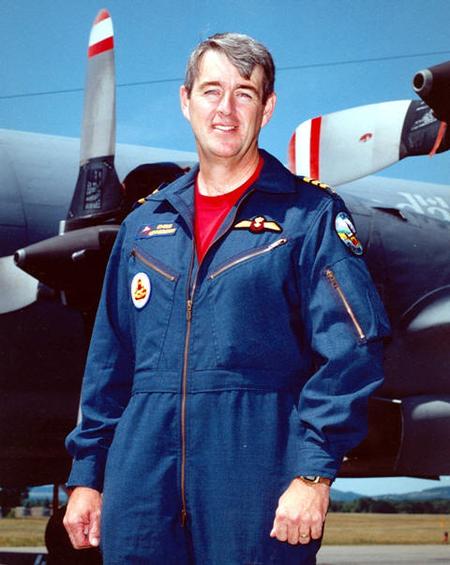 Born in Toronto in 1953, Chris joined the CF as a Direct Entry Officer in 1976 after graduating from the Mechanical Technology program at Algonquin College, Ottawa.   He earned his wings in 1977 and joined VS 880 Squadron at CFB Shearwater.  Promoted to Captain, he served as a Maritime Patrol Captain flying the CP121 “Tracker” on Sovereignty Patrols and Fleet Support Missions.  In 1981 he was transferred to VP 415 Squadron and undertook conversion to the CP140, becoming a member of the first 415 operational “Aurora” crew.  In short order Chris became a Maritime Patrol Crew Commander leading Crew 1 for over two years on a host of Anti-Submarine Warfare patrols.

Following a year of French Language training, in 1986 Chris was promoted to Major and posted to the Directorate of Individual Training at NDHQ.  In 1987 he attended Course 15 at the CF Command & Staff College, Toronto.  Re-assigned to MP 415 Squadron in 1989, he once again served as a Maritime Patrol Crew Commander as well as Flight Commander and Deputy Commanding Officer.  Posted to AIRCOM HQ, Winnipeg, in 1992, he joined the Joint Operations Cell and was subsequently appointed A3 Joint.  Promoted to Lieutenant-Colonel in 1995, he assumed the duties of SSO Exercise Coordination for the emerging 1 Canadian Air Division where he oversaw the development of an Air Component capability for the CF and the initial series of Joint Maple Flag exercises.   During this period he also earned a BA in Economics from the University of Manitoba.

Selected to command of 415 Squadron in 1997, Chris enjoyed three years in this post and was awarded the OMM.  On promotion to Colonel in 2000, he was assigned Commander of Maritime Air Component Pacific located at CFB Victoria.   In addition to serving as the Air Component Commander (ACC) for major West Coast Naval exercises, he was also assigned the duties of MP Force Commander for RIMPAC 02 and the Deputy ACC for RIMPAC 04.  In 2003, Chris joined the South West Asia Task Force HQ in Tampa Florida as COS and was subsequently selected to Command the Operation ATHENA Theatre Support Element in South West Asia.   In 2004 he was assigned the duties of the Canadian National Military Representative at SHAPE, Casteau Belgium.  He held this position for five years during which he was the Dean of the NMR Echelon for his last two years at SHAPE.  Returning to Halifax in 2009, he retired from the CF in 2010.  Over his career he flew more than 5800 hours including 4000 hours on the Aurora.

Chris and his wife Sandra live near the village of Pugwash, NS.  Whilst finishing the construction of their new home, a long term project, he is also kept busy running a small blueberry farm.  He is the President of the 415 Squadron Association – a post he has held since 2005.  He is also the Secretary for the “Friends of Thinkers Lodge” a community support group located in Pugwash.