Born in London on 29 May 1917, George Evans was educated at the Royal Air Force College, Cranwell.  He was commissioned as a Pilot Officer in December 1937 and then a Flying Officer on June 1939.  George was assigned to No. 59 Squadron (RAF) and in 1940 flew Blenheims during the Battle of France.  He was promoted to Flight Lieutenant in September 1940. During a leave period in January 1941 he was married.  On completion of his first operational tour and on promotion to Squadron Leader in December 1941, he was moved to No. 489 Squadron (RNZAF) where he flew Beaufighters.

On 16 March 1943 Acting Wing Commander Evans was appointed Commanding Officer of 415 Squadron.  Within a week of arrival and while conducting an air test, his aircraft crashed. Fortunately he was not seriously injured.  Soon after Wing Commander Evans led 12 Hampden crews to RAF Station Docking and soon after to RAF Station St Eval.   He then led five Hampden crews in a successful torpedo attack against the Italian blockade runner Himalaya, which was being escorted by eight minor German warships in the Bay of Biscay.  All aircraft were hit multiple times by flak.  One crew was lost and Wing Commander Evan’s aircraft was severely damaged.  Fortunately he made a safe return under escort to St Eval.  The Squadron received the following signal: "From AOC 19 Group A/479 11 Apr: Please convey to Wing Commander Evans and those concerned my hearty congratulations on the great determination shown by himself, Flying Officer Brenner, Pilot Officer Batten and Flight Sergeants Clive and McGee, in pressing home their important attack on the enemy blockade runner on 10 Apr in the face of the heaviest opposition."  On 20 April 1943 Wing Commander Evans was awarded the Distinguished Flying Cross (DFC) for his previous service with 489 (RNZAF) Squadron.  He handed over command of 415 Squadron on 1 August 1943 and was posted to 16 Group Headquarters.   Wing Commander Evans was made a member of the Distinguished Service Order (DSO) on 1 October 1943 for his leadership of 415 Squadron.  He had survived three operational tours.

After the war he continued to serve in the RAF, ultimately retiring on 29 May 1968.   George and his wife Daisey had three children and they enjoyed a long retirement in Ashford and Shepway regions of Kent.  George died in 2006, at the age of 87. 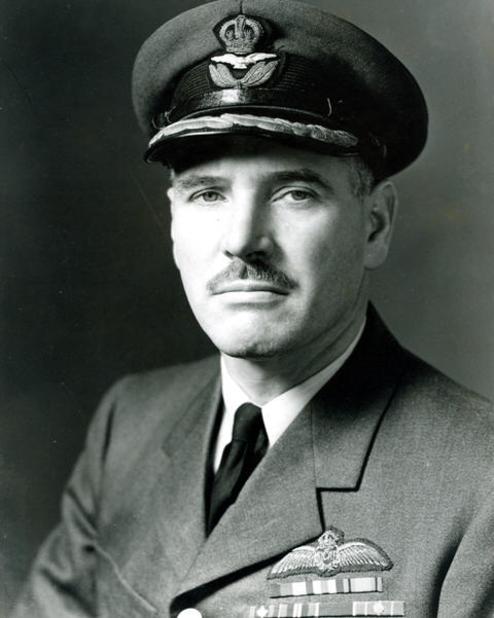