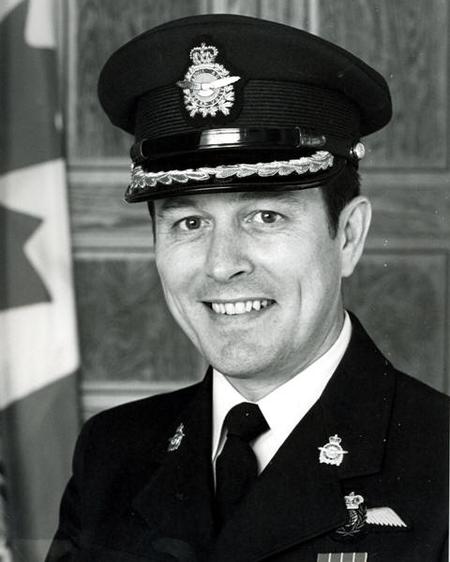 Duane Daly joined the Royal Canadian Air Force under the Regular Officer Training Plan in 1963. After graduating with a BA from St. Patrick's College, Ottawa University, he completed air training as a Navigator at RCAF Station Winnipeg in 1967.

His first operational tour was with 415 Maritime Patrol Squadron (RCAF Station Summerside) from 1967-71.  F/L Daly then served at the Maritime Proving and Evaluation Unit 1971-1975, after which he attended the Aerospace Systems Course (CFB Winnipeg).  Then, as Major, he was posted to VX-1 Squadron, (Patuxent River) from 1976-78.  Maj Daly then attended Staff College (Toronto) and posted to Directorate of Maritime Aviation (NDHQ) 1979-82.  LCol Daly subsequently became the Base Administration Officer (CFB Summerside). After attending the RAF College of Air Warfare (Cranwell), he became the first Navigator CO of 415 Squadron (CFB Greenwood).

In 1995 BGen Daly took early retirement and accepted employment with The Royal Canadian Legion as its National Chief Administrative and Operating Officer. As Dominion Secretary he led the operations and activities of the Legion until his retirement in 2009. His most significant achievement during that time was the of the “Tomb of the Unknown Soldier” project in 2000. He was also instrumental in advising Government on the establishment of the Year of the Veteran in 2005.

BGen Daly has served on the Provincial Councils of United Way and St. John Ambulance in PEI and on the Northwest Territories Council for St. John. He also served for a number of years on the Advisory Committee of the Canadian War Museum and currently serves on the Board of Directors of the Perley and Rideau Veterans Health Centre Corporation. He is a Founding Director and Vice President of the Encounters With Canada Support Foundation. He is an officer of the “Order of St John” and a recipient of the Meritorious Service Medal and the 2002 and 2012 Queen’s Jubilee medals.

BGen Daly and his wife Sharon live in Ottawa, Ontario.