​415 (Long Range Patrol Force Development) Squadron Lieutenant-Colonel Jeff Davis included in his presentations June 1 the naming of 415 Squadron’s Swordfish of the Year for 2016, Sergeant Kim Smith, acknowledging her professionalism and dedication within her job, but also as an individual who supports the squadron as it builds for the future. While Davis gave her a plaque, he also gave her a 415 Squadron license plate to replace the 405 Squadron she had been sporting throughout her posting to 415.         Corporal J. Therrien, 14 Wing Imaging 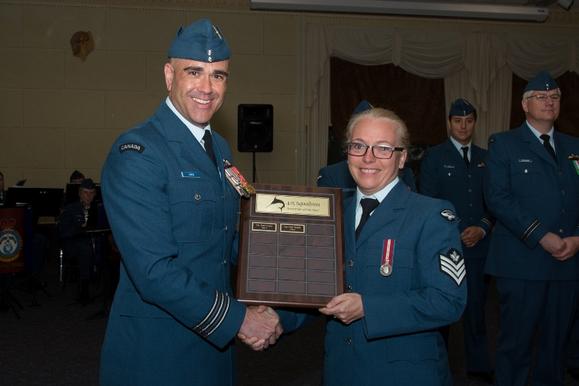 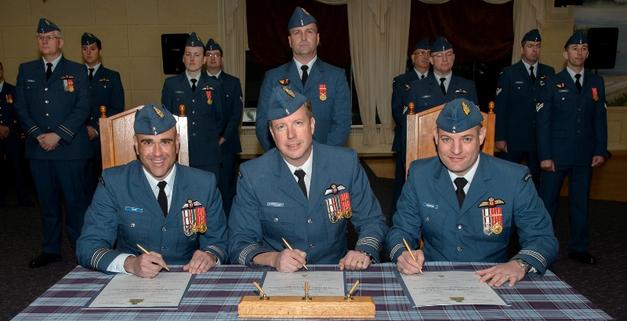 Taking command of 415 (long Range Patrol Force Development) Squadron in 2015, as it stood up after a 10-year hiatus, as a challenge, outgoing Commanding Ofﬁcer Lieutenant Colonel Jeff Davis said June 1, but he believes a strong foundation has been built to support the long range patrol force into the future. At a change of command ceremony at the Annapolis Mess, Davis credited the small but experienced members of the new 415 Squadron for two years’ worth of achievements: the deployment of a squadron aircrew on Operation Impact, members ‘ deployment in multiple roles and support for programs including Aurora aircraft Block IV and software testing. He was also proud of a 2016 Winter Carnival lip synch performance and a competitive B division intersection hockey team. “All these are grounds for strong morale, and a strong unit foundation,” he said. “We’re small, and all of that helped. As I reﬂect, the thing that comes to the forefront was the adversity we all dealt with over this time – and we never wavered in our mission.” He was pleased to be leaving 415 Squadron in the hands of a pre-2005 and post-2015 Swordﬁsh, Major Serge Parisien: “there is no better deserving member, with your long history with 415 Squadron, your work ethic and dedication.” 14 Wing Greenwood Commanding Ofﬁcer Colonel Pat Thauberger oversaw the exchange between Davis and Parisien, highlighting 415 Squadron’s Second World War roots growing into today’s “new role, increasing operational focus under tight timelines… to the development of tactics and procedures. “The pairing of this squadron and Lieutenant-Colonel Davis two years ago was exactly the right decision,” Thauberger said. “Lieutenant Colonel Parisien: your leadership and intelligence makes you the perfect candidate for signiﬁcant challenges in the future. We need to be more aggressive, well-positioned with a rapid injection of technology to be ‘to the mark.’” Parisien himself feels at home in his new role, understanding from his ﬁ rst tour 19 years ago “415 people were giants. But, as they say, ‘ﬁrst tour, best tour.’ I was very happy to take the colours out of the museum two years ago, and this is even better.”